Ramza's default costume is the "House Beoulve Thirdborn". This is his initial appearance

in the first chapter of Final Fantasy Tactics, and his signature attire across all other appearances. He wears a set of armor over a blue long-sleeved tunic and has a white cape. His hair is drawn back into a ponytail. The first alternate coloration recolors his tunic green with a red cape and gives him black boots, while the second colors his tunic red with a green cape and gives him dark yellow boots.

The first alternate costume, "Virtuous Mercenary", is his attire

The second alternate costume, "Unlikely Hero", is the attire

worn by Ramza's in-battle sprite in Chapter 4 of Final Fantasy Tactics. Ramza wears light blue gauntlets and greaves over a thick cloth outfit in black, white, and brown, with an emblem resembling a goat's skull over his chest. The first alternate coloration recolors his armor golden and darkens the black portions of his clothing. The second colors his armor dark silver and the black and brown portions of his clothing to purple and green. 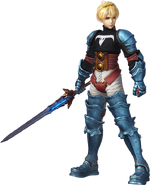 Ramza equips swords. In comparison with the majority of the cast, Ramza's swords are subdued and tame in design, reflective of the middle fantasy era of Tactics. They can be equipped and wielded by him in Final Fantasy Tactics.

The default weapon is the Broadsword, seen in many of Ramza's appearances outside of Final Fantasy Tactics. Despite being labeled as a Broadsword, it resembles a rapier. The first alternate weapon is the Platinum Sword, wielded by Ramza in his official art as a Heretic. The second is the Runeblade, mainly wielded by Ramza's friend, Delita Heiral, from the end of Chapter 2 until Chapter 4. The third is the Excalibur, a weapon primarily wielded by Cidolfus Orlandeau. The fourth is Ragnarok, a weapon obtained after defeating Hashmal immediately before the final boss.

It is unknown if Ramza was summoned to World B and then later dismissed from there sometime between the first and the eleventh cycles.

Unlike most of Materia's warriors, Ramza was only summoned shortly after Shinryu's defeat to assist in the restoration of the world.

Ramza interacts with Cecil Harvey, Vaan, and Noctis on the Floating Continent right after they see Bartz Klauser off. Cecil compliments Ramza on his ability to coordinate well with his allies, to which Ramza responds that he was able to hone that skill because he worked with many allies back in his home world. After Cecil comments that he owes a debt to his own allies due to the sacrifices that they had made for him and for their shared world, Ramza responds that he feels ashamed of his house. Vaan asks if Ramza was born a noble, to which Ramza responds that birth is neither high nor low. Cecil states that people of higher power, such as himself, Noctis, and Ramza, have to protect and assist those in need. Vaan argues that the three set a standard for soldiers to follow rather than have a need to fulfill obligations. After Noctis comments that Vaan's positivity is contagious, the four leave the area.

After the world's restoration is complete, the moogles give Ramza a crystal to host his memories for Materia to use in the upcoming infinitely long war. With a crystal doppelgänger of himself to serve on Materia's behalf, Ramza returns to his home world.

Type: Specialist - Ramza can enhance his Bravery attacks or support his allies by enhancing their attributes.
EX Skill:

Ramza is a new addition to the character roster. Ramza was redesigned by Tetsuya Nomura. All characters in Final Fantasy Tactics were designed without noses, but to preserve uniformity with the rest of the cast, Nomura gave him one: "Ramza is a very popular character, and the image from Mr. [Akihiko] Yoshida are very memorable, so I mulled over it for quite a while before I began drawing. I really pondered over that fact, but in order to preserve the uniformity with the other characters, I gave him a nose."[1]

The English version, Ramza is voiced by Phil LaMarr from Final Fantasy Tactics: War of the Lions.

Ramza is voiced by Shinnosuke Tachibana[citation needed]. He shares his voice actor with Alphinaud Leveilleur from Final Fantasy XIV.

A tease of Ramza.