Ramza and Alma were previously unknown major characters in the Garlean legend of The Zodiac Brave Story, which tells the story of Delita Heiral's rise from pauper to king in the mythical land of Ivalice. Their existence was only recently discovered by Garlean playwright Jenomis cen Lexentale, the stage name of Arazlam Durai, via a rough translation of the Durai Papers he inherited from his ancestor Orran Durai, who was burned at the stake as a heretic for authoring them. Desperate to learn more about The Zodiac Brave Story and Ramza and Alma's role in it, to clear his family name, and to prove that Ivalice actually existed, Jenomis named his own children Ramza and Alma to serve as a constant reminder of his life's goal.

Ramza bas Lexentale and his sister Alma recruit the Warrior of Light, via family friend Cid nan Garlond, to find their father when he goes missing in the ruins of Rabanastre.

Ramza appeared as a recruitable character and his designated job was Squire. 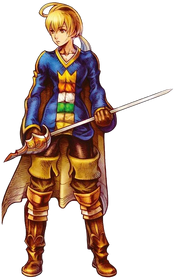 Ramza was announced during the Dissidia Closed Conference 2015 to appear as a playable character and as Dissidia's first ever representative from a non-numbered Final Fantasy title. His outfit is based on his Chapter 1 appearance.

Ramza appears as a playable character.

A squire in training and the youngest son of the great House Beoulve. Before leaving his home to become a mercenary, he was keenly aware of the difference in birth between himself and his illustrious half-brothers. He believes that justice shall not be found in fighting for his own sake but for the sake of others, and he hates those who would sacrifice another's life for any reason.

Ramza appears in the iOS version as a purchasable character.

The youngest son of House Beoulve, Ramza always believed that knights existed to protect the weak, but that belief is dashed by tragedy, leading him to discard his great family name and set out to learn where true justice lies...

Ramza is a playable character and the main representative of Final Fantasy Tactics. He can be available from the start by transferring save data from the second demo. However, if the player did not select him among their party of four, or download the demo, he can later be unlocked by collecting Yellow Crystal Shards.

He is a Balance oriented character. His Limit Break, Shout, adds +50 to Strength, Magic, and Agility. 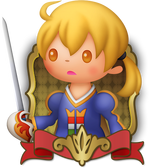 Ramza appears as a playable character.

The youngest son of House Beoulve, the distinguished military family. Joins his friend Delita in driving out the outlaw Corpse Brigade, but winds up forsaking his noble name and making his living as a mercenary.

Ramza is a summonable Legend depicted in his default Final Fantasy Tactics outfit. His abilities are Induration, Stone Throw, Shout, and Ultima. He was first introduced in the event, "Final Fantasy Tactics The Lost Truth - Parts 1 & 2", in which he was made into a playable main character on a special stage called a Tactics Stage. In the Tactics Stage, Ramza could damage his opponents with Attack, Hallowed Bolt, Spin Fist and Ultima.

He was first introduced as an event ally in the event, "Final Fantasy Tactics The Truth is Forever - Extra Event". Leveling him up in this event granted the player rewards depending on how far he has been leveled. Leveling him up to 99 in this event granted players the SR weapon Chocobo Boomerang and the background, Lionel Castle Interior. In battle, Ramza is armed with his rapier and uses the ability, Ultima.

Ramza is a playable character who could be initially recruited during the Challenge Event By Stone Revealed as the First Time Reward for completing the event's Orbonne Monastery stage.

Ramza appears as a vision and optional playable character. He is available in two variants: the first based on his Chapter 1 appearance simply called "Ramza" (ラムザ, Ramuza?), released during the Orbonne Monastery Vaults event, while the second variant is based on his Chapter 2 outfit, called "Mercenary Ramza" (傭兵ラムザ, Yōhei Ramuza?), released during the event In the Name of Love. Both are 5-7★ Rare Summons, though their roles and skillsets differ wildly.

Ramza is a limited playable character alongside Delita, Agrias, Gaffgarion, Mustadio and Orlandeau and both he and Delita share the job of Squire but in a different movement as Delita's main skills and his Limit Burst are from his Holy Knight job. Ramza's Limit Burst is his magic Ultima and his main element within his unit is light.

Ramza appears appears as card and is part of the Thunder-elemental set.

Ramza Beoulve appears as a boss. He wields the Onion Gloves, which is usually an armor piece, as a weapon.

Ramza is a unit recruited during the Ramza Recruitment Event. He is a Four star Super Rare Fighter unit and his unique ability is Steel, which at max level Cures 4 random allies of the Vulnerable status ailment as well as bequeaths them 3 health and 2 attack.

Ramza appears as a recruitable character.

Knights of the Crystals Edit

Ramza appears as a card in the Ivalice Special Arena has a limited-time special arena with eighteen floors.