One of the Pleiad's seven. His Judgment Bolt reduces everything to ash. His mortal enemy, therefore, must be a pile of ash, because...well, what can he do to it?

Ramuh is a character in World of Final Fantasy. He is one of a group of powerful Mirages, known as the Pleiad's Seven.

Notes: One of the Pleiad / Nether Nebula guardian / Master of lightning / Calm, dignified, and strict / No-nonsense grandpa who keeps his nitwit companions in line

A Series Regular
Ramuh has been on the FINAL FANTASY summoning roster as long as Ifrit and Shiva. He doesn't have quite as many titles under his belt as his hot and cold friends, but it's not because he's any less revered. If anything, he tends to play a more important role those times that he does show up.

Bald, or Bold?
Ramuh may look like he's seen a lot of winters, but that's just how he presents himself in Grymoire. Don't assume that he's actually ancient; after all, you can whip up a ramuh of your own in short order with a little fancy transfigging. Perhaps he's just choosing to appear this way to complement his wisdom, dignity, and power.

The Nether Nebula: Part 3
As rare as it is for espers to force their way across worlds, Lusse's predecessor's predecessor knew that even one such crossing could be disastrous. And so, the then-Queen of the Keepers tasked three of the Pleiad—Ifrit, Shiva, and Ramuh—to erect a special tri-elemence barrier in the Nether Nebula to prevent this from ever coming to pass.

For many years, the barrier worked. But unbeknownst to Ramuh, Ifrit and Shiva had been sneaking away from the Nebula to goof around. And this time, they allowed two really bad apples to slip into Grymoire...

Ramuh, along with Shiva and Ifrit, appear before the twins from crystals within the Nether Nebula. After greeting the twins, much to the latter's confusion, they notice their condition and conclude that they are not the same masters they once knew and declare that if the twins wish to command them again, they would have to prove their strength. Stating that rather than having all three of them fight, the twins can select one they want to fight.

Though the twins emerge victorious, the three Mirages inform them that they still lack the power to command such powerful Mirages in battle. Instead, they leave them a prismarium with a lesser Mirage belonging to their tribe and bid their farewell.

'Twould be foolhardy to challenge me. My Judgment Bolt strikes with such force it would shatter your very soul.

When chosen to fight in The Nether Nebula 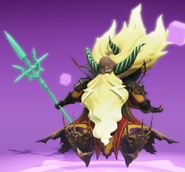 Ramuh as he appears in the Mirage Manual.