God of the Storm. The Fulgurian, it is said, administers the natural laws of Eos from on high, casting judgment on those who would harm the star. Resting at Angelgard in the Astral War's wake, the Stormsender awoke to the calls of the Oracle Lunafreya.

Ramuh, also known as the Fulgurian, is an Astral in Final Fantasy XV. He is one of the Six and a towering wizard who controls thunder and rain. Noctis Lucis Caelum forges a pact with Ramuh after passing his trial in the Duscae region in Chapter 5.

Like the other Astrals, Ramuh is based on a recurring summon in the Final Fantasy series. He is the staple lightning summon, and in Final Fantasy XV, appears as a gigantic wizard with a long, white beard and small, hornlike protrusions on his forehead. He has red eyes, and wears flowing, green robes with a high collar. He always floats and doesn't appear to have legs, his lower half being the billowing coat. Ramuh's massive size in Final Fantasy XV resembles the summon's unused concept art ( 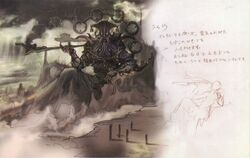 Despite its now-sacred status, Angelgard served as a prison-on-the-water in antiquity. Criminals were exiled to the isle; there, the thunder god Ramuh passed judgment upon them, smiting the unrepentant sinners. While many are quick to dismiss this history as a mere morality tale, accounts of Lady Lunafreya traveling to the island to forge a covenant with the Stormsender suggest his divine presence is, indeed, fact and not fiction.

The world was once in peace with the Six Astrals looking over Eos. When criminals were sentenced to prison on Angelgard, Ramuh would pass judgment on them and smite any unrepentant sinners with a bolt of lighting. After the emergence of the Starscourge and the War of the Astrals, Ramuh went to rest in Angelgard, the island off the coast of what would become Galdin Quay. Two millennia later, he is awoken by Lunafreya Nox Fleuret, the Oracle, who wants Ramuh to forge a covenant with Prince Noctis.

Ramuh calls out to Noctis by trapping the Duscae region in a powerful thunderstorm. Noctis is guided to pursue him by Gentiana, the High Messenger of the gods. Ramuh forges a pact with the prince when his trial is passed, and he is later called upon to annihilate Niflheim troops in an imperial base. This enables Noctis and his friends to reclaim their car, the Regalia, after an encounter with Ravus Nox Fleuret. Ignis speculates that Ramuh's thunderstorm was also to prevent Niflheim from calling an airship to transport the Regalia preventing Noctis and his friends from ever reclaiming it. This speculation is reinforced by Ramuh helping the party retrieve the car.

Ignis: Is the storm ready to rage?
Noctis: Just say when.

After Noctis disappears inside the Crystal the world becomes enveloped in the long night. Mankind comes together to defend the remains of civilization in wait for Noctis's return as the True King. The Astrals forgive the Kingsglaive for their betrayal of the crown after they prove that they want to protect the world. Ramuh, alongside the other Astrals, appears to the Glaives chosen to protect Angelgard, the island where the True King is to awaken, where he tests the worth of Glaives who stand trial before Bahamut in the name of defending Noctis.

Noctis awakens after ten years inside the Crystal and heads to the Citadel to bring light back to the world. Ardyn Izunia, the Starscourge incarnate, places various obstacles upon Noctis's path, including cloaking the Citadel in a magical barrier. Lunafreya's spirit sends the Astrals to pierce through it. As Noctis sits upon the throne and calls down the past kings the Astrals show up and turn into energy, entering the Ring of the Lucii alongside Noctis and the kings.

Noctis obtains Ramuh by completing the Astral's trial in Chapter 5. This requires him to interact with a series of special landmarks hidden throughout the Duscae region. These are guarded by Griffons, and Noctis is unable to leave until he discovers all of them. The last landmark is located at the end of Fociaugh Hollow.

Ramuh, the Fulgurian, has deigned to support the struggling king. Noctis can call upon the god's powers to defeat his foes. 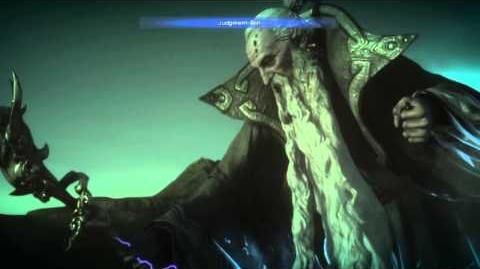 The chance to summon will appear randomly while in battle, and the player can summon once per battle (as long as summoning is enabled). Summoning is unavailable (aside from cut scenes) in the locations for chapters 9–13. Each summon can be called around once per in-game day and each has its own requirements to be considered during the "summon roll", which happens every 10 seconds. While possible to summon during the first roll, it is rare. Ramuh's chances increase the longer the battle goes on. As he doesn't have other requirements he tends to be summoned the most often. He can be summoned anywhere.

When summoned, Ramuh picks up Noctis with his left hand and wraps the tip of his staff in lightning. He uses Judgment Bolt, tossing his staff at the enemies below him to set off a massive explosion that chars the surrounding landscape. If called upon within a dungeon, Ramuh performs a different version of Judgment Bolt, during which he looms overhead while gathering electricity. The Fulgurian then summons his staff and throws it, filling the area with lightning.

When brainstorming concepts for Ramuh, designer Hiroyuki Nakamura (who ended up designing Pitioss Ruins) suggested the clouds would part and Ramuh's face would descend from the sky toward the player. The designers couldn't figure out how Ramuh would attack from that position and ultimately didn't go with that idea.[1]

Ramuh is the only Astral that can be obtained in Final Fantasy XV Episode Duscae. Noctis must interact with a tree located deep within Fociaugh Hollow. Ramuh can be called upon whenever Noctis's HP is fully depleted, and when he appears, the Astral uses Judgment Bolt to kill all targets within a wide radius.

Ramuh appears as a summon as he does in the console version.

Minecraft
Add a photo to this gallery

Lunafreya rouses Ramuh from his slumber.

Ramuh appears from the clouds.

Ramuh prepares to throw his staff.