Lightning given sage form, venerated by the sylphs.
Though depicted in legend as a wise and benevolent elder who harbors ancient secrets, Ramuh is a merciless arbiter of those who would defile the sacred depths of the forest, striking down interlopers with fulminating bolts of lightning.

Ramuh is the primal of Sylph beastmen tribe, and a superboss in Final Fantasy XIV: A Realm Reborn as he appears in the main story quest and an optional "extreme" battle.

Ramuh is a towering elderly man with a voluminous beard, black robes. He wields a staff of judgment. Unlike other primals, he is even-tempered and does not intend to drain aether more than necessary, reflecting the Sylphs' laid-back attitude. He condemns the actions of the other races in causing strife, yet is willing to let the Warrior of Light prove their worth as a champion of Eorzea.

Much like Ifrit, Ramuh speaks with an archaic dialect.

The Lord of Levin was the center of a schism between the Sylphs sometime around the Calamity when there was a division on whether Ramuh should be summoned. Those who wanted to call forth their god became xenophobic touched "Violets", while the rest fled to Little Solace under Gridania's protection.

The Scions of the Seventh Dawn investigated Ramuh shortly after Ifrit's defeat to determine how much of a threat he presented. The Warrior of Light located the missing elder Frixio of Little Solace, who assured the touched Sylphs had no desire to war with Gridania, and hadn't been agitated enough by Castrum Oriens into summoning Ramuh fully.

The Garlean presence in East Shroud—along with the later appearance of Garuda and Good King Moggle Mog XII—wasn't enough to push the Violets, and they dared not summon Ramuh once Gaius van Baelsar revealed the Ultima Weapon. The back-breaking straw came from the unrest in Ul'dah that caused by a riot induced by Teledji Adeledji's machinations. The influx of refugees fleeing to The Black Shroud finally prompted Ramuh's appearance.

I have taken thy measure, Bringer of Light. And I judge thee a worthy champion. The task of excising the sin that hath taken root in man's heart is thine.

In hopes of maintaining peace, Elder Seedseer Kan-E-Senna bade the Warrior of Light to parley with the Lord of Levin. Ramuh was dismissive, condemning the strife caused by man. He relented and let the Warrior prove their worth in a trial by combat. Once defeated at the Striking Tree, Ramuh deemed them worthy of being champions of Eorzea, and returned to the aether.

The Sylphs still feared for the safety of their grove and summoned forth Ramuh once more. As his very presence was a danger to the land, the Warrior of Light was again forced to defeat the Lord of Levin.

When the party used the spaceship Ragnarok to reach Ultima Thule, the beast tribes summoned benevolent iterations of their primals using the Mothercrystal, with Ramuh being one of the ten summoned. He gave his power to the Ragnarok, allowing it to achieve the propulsion needed for the Scions to reach their destination.

After encountering Rhalgr of the Twelve, G'raha Tia speculates that the Destroyer may have been the inspiration for the sylphs' worship of Ramuh.

Ramuh is fought as a boss twice at the

The Striking Tree: first in the "Defenders of Eorzea" arc of the main scenario, then in an optional Extreme battle. Both are fought at level 50 with a full party of eight. He is later encountered again in

"Thunder Rolls" plays during the battle against Ramuh in the Striking Tree quest.

Ramuh appears on a Thunder-Elemental card.

Ramuh appears on a Triple Triad card in the version playable via Final Fantasy Portal App.

Ramuh is voiced by Kazuhiko Kishino in Japanese and Neil Kaplan in English, who is credited as Bob Johnson. 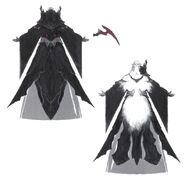