Causes Thunder damage to all enemies.

Ramuh is an eidolon in Final Fantasy IX who can be acquired as a summon for Dagger. He is a Lightning-elemental summon who takes the form of an old man. He is the first eidolon Dagger is likely to summon. He is known as Old Man Ramuh when met.

Ramuh was an eidolon that manifested to protect the crystal of Gaia. Summoners discovered eidolons by researching legends documented from around the world, and the Thunder God, Ramuh, was one such legend.[1] The practice of summoning him presumably went back centuries, as he appeared on a mural on the Eidolon Wall in Madain Sari, the summoners' village on the Outer Continent. As the summoners left the Mist Continent 500 years ago, summon magic fell into legend among the Mist Continent populace.

After the king passed, Queen Brahne became power-hungry and wanted to conquer the Mist Continent with the aid of eidolons extracted from Garnet and with her new army of black mages. Her eidolons stolen from her, Garnet escaped Alexandria Castle with her new friends and wound up in Pinnacle Rocks. She was upset at having learned of her mystical powers in such a gruesome way, but in her hour of need, Ramuh appeared to her and implored her to embrace her heritage as a summoner even if the power scared her. Garnet completed Ramuh's trial by assembling pieces of a story to the correct order, deciding on the ending. Ramuh disappeared and Garnet gained his jewel, the peridot, learning to call him forth in battle.

Ramuh is an elderly man who has a different appearance on the field and in battle. On the field, Ramuh is a bald old man with a white mustache and beard, a staff, a tan robe, green trousers and leather sandals. He appears like a human, but sits cross-legged while levitating, belying his supernatural nature.

In battle, Ramuh is much larger and more imposing. His beard now flows down to his feet, and his robes are more elaborate with long sleeves that billow about him when he casts his magic with his horned staff. His mustache is now enormously long and adorned with green gems (possibly peridots in reference to the gem used to learn him as a summon).

Ramuh is the only one of Garnet's eidolons to speak to her, and the only one of her eidolons whose personality can be inferred. Alongside Ark and Madeen, Ramuh appears outside of being called forth by a summoner. He is kindhearted and wants to help Garnet, recognizing her as a summoner. Eidolons are said to communicate telepathically via the summoner's horn, as explained by Eiko Carol, but having had her horn removed as a child, Garnet is unable to do this. Though Eiko communicates with eidolons in a way no one else can hear, Ramuh speaks to Garnet in human language and Zidane and Vivi, who are with her, likewise understand him.

This is where the party wakes up after the Gargant crashes. After meeting Ramuh, returning to this area will reveal the "Hero" part of the story.

"Hero"
Historian's explanation:
Although Joseph's death was not
reported to his daughter, the manner
of his death speaks for itself.
This is the story of a true hero.

The Path is divided in two areas: the first one contains the "Beginning" and "Human" parts of the story.

"Beginning"
Once upon a time, 33 small countries fought
together against an empire. One day, a
rebel troop visited a man named Joseph,
who lived with his daughter. Owing a
debt to the troop, he gladly accepted
their plea for help. They headed for a
cavern in the snow field.

"Human"
Historian's explanation:
The fact that they didn't report Joseph's
death to his daughter was indicative
of their guilt for failing to protect him.
In the end, heroes are also human.

While the second one has a lower section with the "Cooperation" part.

"Cooperation"
With Joseph's help, the loop defeated
the adamantoise in the snow field cavern and
acquired the Goddess Bell they needed to
enter the empire's castle.

And a higher section with the "Silence" part.

"Silence"
On their way home, they fell into a trap
set by a traitor. Joseph gave his life to
save the troop. The troop left without
telling Joseph's daughter, Nelly, about
the tragedy.

The correct order to the story is: Beginning, Cooperation, Silence, and either Hero or Human.

Ramuh costs 88 MP to summon before Garnet/Dagger loses her eidolons, and 22 MP after learned from a piece of Peridot for 30 AP. Ramuh is not one of the eidolons Dagger has originally, so she can only use the 88 MP version if one manipulates their save file to give her Ramuh early.

One Peridot is obtained from Ramuh's trial at the Pinnacle Rocks, and more are available from the following enemies as drops: Griffin, Mistodon, Stroper (also stolen from it), Grenade, Tiamat (Crystal). It can also be synthesized in Daguerreo, in Black Mage Village (endgame) and with Hades. Twelve are found in the "Abandoned Beach" chocograph treasure, and eleven in "Cold Lagoon" chocograph treasure.

The formula used to determine the amount of damage an eidolon does during its full animation is as follows:[2]

Ramuh is an especially useful eidolons against enemies weak to lightning and magical damage in general. Summoning Ramuh earns the Bring on the Thunder achievement in the mobile and Steam versions.

Ramuh has an eidolon-type card for Tetra Master, which can be obtained late into the game. Hippaul has also hidden his Tetra Master cards at the top of the steeple in Alexandria. If the player looks there at the beginning of the game, they find generic monster cards, but if they check back later (but before Alexandria is attacked), they will find eidolon cards for Shiva and Ramuh. If the player doesn't check the steeple before progressing the story to the Treno card tournament, they will be lost, but the card players in the Treno tournament in endgame, and the card phantoms in Memoria, may still play them. 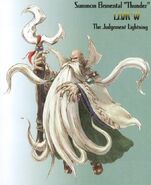 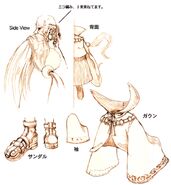