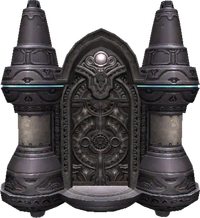 Ramparts are one type of Archaic Machinery that appears in the Ruins of Alzadaal. They resemble doors, but are far more destructive than their passive counterparts. They may fall within the Arcana class of monster, and perhaps could be considered a sub-class; however, at this time they are separately classified, and it is not known whether they share other traits of those classes.

[view · edit · purge]Rampart is a defensive wall or bank around a castle, fort or settlement.