Covered by a hard shell. Slow-moving, but has high physical and magic defense. Vulnerable to ice. Falls easily to Piercing weapons. Have Auron slice it down the middle.

The Raldo is a fiend in Final Fantasy X, encountered along the Mi'ihen Highroad. This enemy is encased in a thick shell, so a weapon with Piercing works best, mainly found on Auron's and Kimahri's weapons.

A Raldo is fought in a tutorial battle to demonstrate the Piercing auto-ability on Auron's weapons. This Raldo is immune to Threaten, Bribe, and Scan, and has a Doom count of 3. Afterwards, the Raldo's attacks have a small chance of inflicting Berserk, unless Provoked.

Raldo will drop weapons with any of the elemental strikes as well as Distill Power (Strength/Magic +3% in the original JP/NA version). They also drop armor with Berserk Ward and Defense +3%. 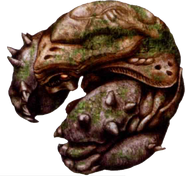