Rakshasa Blade (羅刹の剣, Rasetsu no Ken?, lit. Rakshasa's Sword) is a recurring sword in the series. It has become known as the signature weapon of Ardyn Izunia.

The Rakshasa Blade is a

Paladins. It is a 4-star crafted item for

Blacksmiths, some of the materials for which can only be acquired by trading Allagan Tomestones. Players can trade in Rakshasa Blades in Rhalgr's Reach for Rakshasa Tokens, getting more tokens for high quality trade-ins. The tokens can in turn be traded for the identical, yet more powerful, Yama Blade.

A sword that has stayed at Ardyn's side for roughly two thousand years, flying forth at his command. One half of a pair, the Rakshasa Blade was forged alongside the Blade of the Mystic, beloved blade of Ardyn's younger brother Somnus Lucis Caelum. Both blades possess different properties, forming a devastatingly destructive arsenal when wielded together. While one can assume both swords were imbued with the hope that the Brothers Caelum would rule in tandem, envy and ambition ultimately tore the two apart.

The Rakshasa Blade is the signature weapon of Ardyn Izunia. It is the companion sword to Somnus Lucis Caelum's Blade of the Mystic. Apart from the Rakshasa Blade's red color, the weapons are identical. In Final Fantasy XV -The Dawn of the Future-, it is revealed that the pair of longswords was bestowed upon the brothers by their parents.

The player can wield the sword as their melee weapon in Episode Ardyn. Completing the episode gains the "Mutant Rakshasa Blade" for use in the main game as a greatsword. It uses the same multi-hit warp-strike as the Blade of the Mystic, and doesn't cost HP to use; however, it uses the default slow greatsword combos, and its net attack power is slightly weaker in exchange for added magical stat boosts. As the weapon is classified as a greatsword and not a royal arm, it is affected by enemies' weaknesses and resistances, aside from the warp-strike itself, which always deals neutral damage.

The Rakshasa Blade is the default weapon for Ardyn Izunia, being included in the basic DLC fighter set along with "Divine Blade" and "Ifrit's Sword".

The Rakshasa Blade appears as a sword, and is an Affinity Weapon for Ardyn rated at 5 stars with an initial capacity of 15 CP. When equipped on Ardyn, it enhances his default Warp-strike command. One copy is awarded upon completion of Act 2 Finale, Part 1 in Normal Mode, after its initial release as a complimentary gift in Winter 2020 (JP) and Autumn 2020 (GL). It is available through the Token Exchange for 10 Power Tokens, otherwise via in-game gacha whenever Ardyn is a featured unit. 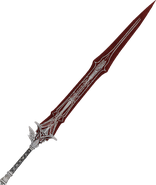 [view · edit · purge]Rakshasa are gigantic demons from Hindu and Buddhist mythology. They are powerful beings aligned with evil, who live on human flesh and spoiled food. The creatures make an important appearance in the epic of Ramayana.

The name is in juxtaposition to Somnus's Lucii form, although the connection is not apparent in the English localization. In Japanese, Somnus's Lucii is known "the Yaksha King"; Yaksha is a class of nature-spirits, usually benevolent, who take care of the natural treasures hidden in the earth and tree roots in Hindu, Jain and Buddhist texts. The Yakshas are described in Hindu literature as the brothers of Rakshasas.