A guy like that? He was carried in here crying like a baby, and I was the one who had to take care of him... His crude way of speaking... I don't know if his aspirations as a journalist... Every time I try to have a serious conversation, he avoids it... I can't stand his snoring and he talks in his sleep...

Raine Loire in reference to Laguna

Raine Loire is a non-playable character in Final Fantasy VIII. A resident of the small village of Winhill on the Galbadian continent, she is the second love interest of Laguna Loire and acts as Ellone's guardian.

Raine has long brown hair held back with a yellow hairband and blue eyes. She wears a white knitted turtleneck sweater and blue jeans. She has white tear-drop earrings and black shoes.

Raine is strong-willed and independent. Her empathetic spirit is exemplified in how she adopted Ellone, and when Laguna was washed ashore after escaping from Centra she volunteered to nurse him back to health and keeps tolerating him despite her many excuses on to why she should not, although outwardly, she seems quite exasperated with him. According to Winhill villagers, Raine used to run a flower shop in the town square as well as the pub. Her specialty were white flowers, and she would make wreaths for autumn festivals. It was said no one understood flowers like Raine.

Raine lived in Winhill, a small village on the Galbadian continent. She used to live alone and tended a bar in the center of town. She spent much of her time at the local flower shop, which carried her favorite white blooms.

During Galbadia's Sorceress War with Esthar, Estharian troops raided Winhill. Esthar's leader, Sorceress Adel, was searching for an heir, and the soldiers demanded the village hand over its young girls for consideration. Raine's next-door neighbors refused to hand over their daughter, Ellone, and were killed. Ellone escaped the Estharians' clutches, and once the soldiers had departed, Raine adopted the little girl.

Raine met Laguna Loire as an unconscious casualty. A Galbadian soldier, Laguna had been critically wounded in battle and Raine took him in and nursed him back to health. Eternally grateful for rescuing him Laguna remained with Raine for several months, repaying his debt to her by helping her look after Ellone and patrolling Winhill to keep its residents safe and its streets monster-free. Although Raine and Laguna were only friends at first, their relationship deepened and they fell in love, much to Ellone's delight.

On a moonlit night in the fields of Winhill, Laguna presented her with a wedding band. Surprised but pleased, Raine accepted his proposal. Their family was torn apart, however, when Sorceress Adel's minions returned to kidnap Ellone, taking her away to Esthar to become Sorceress Adel's successor. Laguna, along with his friends Kiros and Ward, prepared to journey to Esthar and rescue Ellone. Although Laguna promised to return with Ellone, Raine would never see her husband again.

After Laguna's departure, it became apparent Raine was pregnant. It is uncertain whether or not Raine knew she was pregnant before Laguna left, but if she did she chose not to reveal this information to him. As her condition advanced, Raine became more desperate for Laguna to return, as she wanted him to be there to witness the birth of their child.

Just before Raine's baby was born, Ellone returned to Winhill. Laguna had rescued her in Esthar and defeated Sorceress Adel, but, unaware of Raine's condition, Laguna had stayed behind to help the Estharians rebuild. He had sent Ellone home to Winhill ahead of him, promising to return when his work was finished. Raine gave birth to Squall, but died shortly after,[1] and both Ellone and Squall were sent to Edea's Orphanage set up to care for children orphaned by the Sorceress War.

Raine was buried on the crest of a small hill in Winhill. Her final resting place is marked by a simple stone plaque which reads "Raine Loire". A pair of gold angel wings, similar to those associated with Rinoa, decorate the top edge. When Squall visits the post-war Winhill when he is 17 and working as a SeeD, he can feel a Raine's lingering presence in the pub when he looks at the white flowers placed in a vase. The flower shop lady tells him the flowers in her shop were given to her by Raine.

After Sorceress Ultimecia has been vanquished, Laguna, now president of Esthar, returns to Winhill to visit Raine's grave.

Although she does not appear directly, Raine's tombstone is featured during the Field Music Sequence for the "Ending Theme" on the iOS version only.

Unused concept for "Julia Loire's" grave whose artwork was later used for Raine's grave in the ending.

Storyboard for the proposal scene.

Raine listing off reasons why she shouldn't like Laguna. 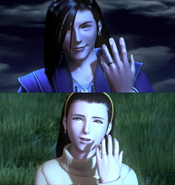 [view · edit · purge]In Europe and North America, Raine is both a female given name and a surname. It is also used as the diminutive form of Lorraine and Raymond. "Raine" may also be a weather-related pun similar to her son, being pronounced the same as "rain".

[view · edit · purge]The Loire [lwaʁ] is the longest river in France. There is also a department called "Loire" and "Haute-Loire" in Rhône-Alpes' region.

Although never confirmed in the game, many assume Raine's maiden name may be Leonhart, which is how her son would have inherited it, perhaps due to the villagers of Winhill never having accepted Laguna or his marriage to Raine. Leonhart is a variation of the English surname "Lionheart". [view · edit · purge]Lion Heart means to possess or display courage, being able to face and deal with danger or fear without flinching.