Rail transportation (大陸横断鉄道, Tairikuoudantetsudou?, lit. Transcontinental Railroad) is the main method of traveling across the world of Final Fantasy VIII, until the party obtains the mobile Garden and Ragnarok.

Rail travel is used five times during the story. After graduation, the first SeeD mission is based in Timber, and the train is required to get there. During the journey, Squall, Zell and Selphie have a strange experience where they dream about Laguna, but recover shortly before arrival.

Their mission in Timber is train-based, which involves hijacking President Vinzer Deling's carriage by uncoupling the train cars around the target. Afterwards, the party leaves Timber by rail, heading towards the East Academy Station near Galbadia Garden. After the events in the Garden, the party travels to Deling City by train. The last use of the train is on disc 2, when the SeeD members travel back to Balamb to warn about the missiles fired at Balamb Garden.

With a blue and grey color scheme, these trains are the primary type seen racing around the globe as civilian transports pulling groups of passenger carriages along. Powered by a turbine mechanism, their cars' coloring differs depending on the travel region. Usually, the train is comprised of four cars.

In some trains, SeeD have special cabins designated for private use. The cabin includes a large couch and two bunks as well as providing entertainment for long journeys, such as magazines. 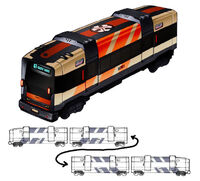 Trains and monorails are predominantly seen traveling through Timber. Composed of three cars each, the rollcars are given a flush and crisp design, while the monorails have more curved appearances. Local residents coming and going from the TV station make use of the rollcar lines. 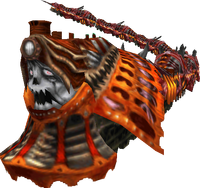 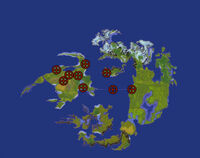 Train Stations are dotted throughout the country of Galbadia, with some located within towns/cities while others are solitary, located in various areas of wilderness. While most are in varying degrees of operation, there are one or two that have fallen in disrepair due to a lack of use, the most extreme examples of this being in Fishermans Horizon and the station near the Great Salt Lake, which have both been abandoned, due to the Sorceress War and Esthar's self-imposed "silence" thereafter. 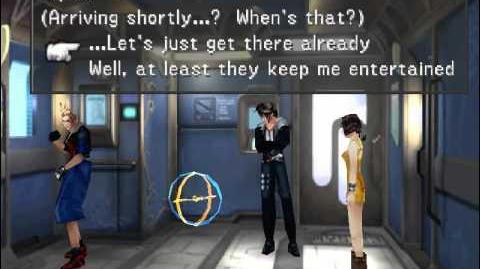 An unused segment for the train ride to Timber where Squall, Zell and Selphie do not use the SeeD cabin and fall asleep exists as dummied content. In it, Selphie plans to check out the other cars and Zell keeps active, intending to "warm up" for the upcoming mission. Squall is exasperated by his comrades' behavior, but keeps his feelings to himself, sarcastically noting that at least he will not get bored with these two around.

Another unused line has Zell marveling at the train, saying the transcontinental train line goes around the world and they could go on an around-the-world trip on the train if they wanted to. This line was likely removed because the trains do not actually go around the world. 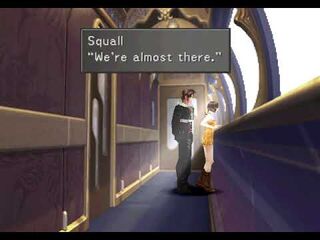 There exists another dummied scene for when the party is heading to Deling City from the Galbadia Garden after Irvine joins the SeeDs. Rinoa does not want to go to Deling City, but does not elaborate a reason. Quistis detests doing assassination missions, but sees it as a mandatory part of their job. Zell worries the mission may be jeopardized by Squall falling asleep in the middle of it, and they wonder who is behind the "dream world" phenomenon. Irvine marvels at how cute the girls in the party are and asks who Squall's favorite is, which leads him into thinking about his stance on dating. 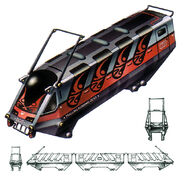 Squall on the train.

Selphie and Squall on a train. 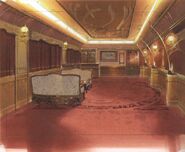 Concept art of the president's cabin.