An icon sprite of Raijin appears in the PocketStation memorycard file manager.

Raijin appears as a playable character.

Raijin appears as a boss in select FF VIII stages and is a playable character who could be initially recruited during the Challenge Event Cutting Winds, Soaring Lightning as a First Time Reward for completing the event's Galbadia Garden stage on Classic difficulty.

Raijin appears as part of the lightning set of cards.

Raijin makes an appearance in Kingdom Hearts II, along with Seifer, Fujin and Vivi Ornitier from Final Fantasy IX. The four make up "Twilight Town Disciplinary Committee", and are antagonistic towards Roxas and later Sora, although once he saves them from the Nobodies they show more respect towards him. He is referred to as "Rai". He still keeps his speech patterns, saying "ya know" after every sentence.

Raijin is mentioned in Kingdom Hearts III by several NPCs in Twilight Town stating he and Fujin joined Seifer as he went on a "warrior's journey".

In the Japanese version Raijin is voiced by Kazuya Nakai. He is voiced by Brandon Adams in the English version.

He appears in the remake, Kingdom Hearts Union χ[Cross], on several medals. 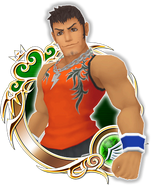 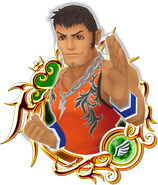