Hey, jus' like Fujin said, ya know!? We're with Seifer. Always have, always will.

Raijin is a character from Final Fantasy VIII. He is Seifer's friend and is fought against as a boss. He, Fujin, and their leader Seifer, make up the Balamb Garden disciplinary committee. Despite being physically formidable, Raijin tends to be the underdog of the group whom both Fujin and Seifer boss around.

Raijin is a muscular, dark-skinned 18-year-old with short black hair and dark brown eyes. He wears a blue vest and long, baggy black pants tied with a red belt and black boots. He has white bands around his forearms and wears a large yellow beaded necklace. He wears a long pole in battle. In-game, the insignia on Raijin's shoulder guard is the kanji for "thunder", but in his FMV model, it reads the self-invented kanji for Raijin's name.

In Kingdom Hearts II, Raijin wears a modern outfit as opposed to his primary outfit in the original and appears similar to a hip hopper. He wears an orange tank top with black designs on his shoulders, black trousers with two red linings and a number 8 embedded at the left side and yellow and white sneakers with black soles. He wears blue bands with white outlines and a chain necklace with a lightning pendant.

Fujin tends to kick him when he talks out of line or does something stupid, which is often. Raijin is bumbling and depends on his friends for guidance on what they should do next. He is implied to be lazy, as when Seifer promotes him to captain, Raijin sneaks off to nap instead of taking care of the duties he was given. He is fond of insects, as he has checked out several books on the subject from the Balamb Garden library. He tends to add "ya know?" (simply "mon'ya" (もんや) in the Japanese version) to the end of his sentences. Out of Seifer's "posse", Raijin is the friendliest toward Squall and his group and doesn't seem to hold any particular grudge or ill will against them.

Raijin is enrolled at Balamb Garden where he, Fujin and Seifer form the Balamb Garden disciplinary committee. Rarely seen apart, the three usually bully their fellow students through punishment and detention. When Seifer breaks out of the disciplinary room and goes rogue, Fujin and Raijin embark to find him despite the Garden already sending Quistis to do just that. Headmaster Cid instructs Fujin and Raijin to deliver new orders for Squall's party to Galbadia Garden's Headmaster.

At Galbadia Garden, they do as they were asked and run across Squall who informs the pair that Seifer has been executed for actions against the Galbadian president, but the two don't believe Seifer would go down so easily. The two are next seen back in Balamb Garden and help Squall evacuate the students because of the missile threat.

After that, the pair go missing and it is unknown when they reunite with Seifer but, as Seifer has become Sorceress Edea's Knight, Fujin and Raijin become generals of the Galbadian army to support him. Assisting in the search for Ellone the two encounter Squall again in Balamb Town during a Galbadian-induced lock-down. Squall defeats them, but lets them leave peacefully.

Fujin and Raijin are in Galbadia Garden during the Battle of the Gardens, but choose not to fight Squall and his friends. Some time afterward, after Sorceress Edea's defeat, the two again assist Seifer as he embarks on resurrecting the Lunatic Pandora. However, the two begin to admit that Seifer is no longer the friend they once knew, and when Squall again arrives to stop the three, they allow him to confront Seifer. Fujin makes an emotional plea for Seifer to stop what he is doing, but he only claims it is too late to go back, and wishes them a good life, before again losing to Squall.

After Squall and his party go into the future to defeat Ultimecia, Fujin and Raijin fish at Balamb together with Seifer who has returned to being the friend they remember. Raijin catches a fish, angering Seifer, who has caught nothing. Fujin boots Raijin into the sea, which makes Seifer laugh.

Raijin is fought three times. The first and second battles use the same stats, though he uses only one attack in the first. He attacks with a battle staff.

Claiming "I don't hit girls, ya know?", Raijin will refuse to attack if there is only a single female character left standing in the player's party. This does not apply if he is alone.

Raijin shares his Triple Triad card with Fujin. Theirs is a Level 6 Boss Card with good values for playing the minigame that can also be turned into an X-Potion with Quezacotl's Card Mod. The card can be rarely Carded from Iron Giant or Jelleye and won from NPC card players who use Level 6 cards.

Raijin has appeared in the following games throughout the Final Fantasy series:

Raijin has made guest appearances in the following non-Final Fantasy games:

Goodbye, Pupurun tells the story of the small sprite Pupurun rendered into the language of humans. Originally it was part of the Balamb Garden Library's collection of books, Raijin borrowed it and never returned it, as can be seen on the Balamb Garden Study Panel. Its sequel, We Meet Again, Pupurun, was not as successful as the first work, being an obligatory production with poor content.

Raijin, along with Fujin, was initially designed to appear in Final Fantasy VII, however, the inclusion of the Turks saw their presence unnecessary and they were shelved until Final Fantasy VIII.[2]

Artwork of the "disciplinary committee".

Raijin during the Battle of the Gardens.

Raijin in the ending.

Raijin showing off a fish he caught. 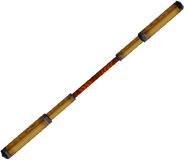 [view · edit · purge]Raijin is the Japanese thunder god. In Chinese Buddhism, a legend states that Fujin and Raijin were both originally evil demons who opposed Buddha. They were captured in battle with Buddha's army of heaven, and have worked as gods since then.