Raiden (ライディーン, Raidīn?) is a recurring summon in the series. Raiden is often an upgrade to Odin.

Despite its English name associating it with the Japanese God of Thunder, unlike Raiden from Final Fantasy XII: Revenant Wings its Japanese name is not a match for it (see the etymology section for more details). In its original appearance at has no association with any element, and in its subsequent appearances it has been associated with Wind, Earth, and Lightning.

Raiden is an esper obtained by bringing the Odin magicite to the statue of the Queen in the Ancient Castle basement. The Queen will drop a tear that will hit Odin, who will transform into Raiden. Raiden's summon ability, Shin-Zantetsuken (originally called True Edge), inflicts Death to all opponents. Its Hit Rate is 140, works against the undead and will stall an enemy's final attack one turn, but it will fail on targets immune to Death. It costs 80 MP to summon. It teaches Quick at a rate of x1.

Raiden's Level Up bonus boosts Strength by 2. Because Odin is the only esper in the original game to give a Level Up bonus to Speed, many players kept him rather than transforming him into Raiden. The Advance and mobile/Steam versions adds new espers, making Odin no longer the only esper with a Speed bonus.

Raiden is a boss in the Baldesion Arsenal in Eureka, Hydatos. 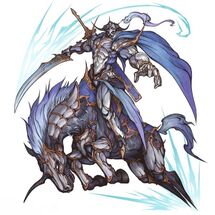 Raiden is a wind-elemental Eidolon. It can be obtained as a signet for Maina and teaches her Painkiller abilities.

In the original free-to-play version, Raiden's signet could only be obtained through the summon draw shop and could be equipped by any party member.

The patron king of knights errant, also known as the "Lawbringer."

Raiden is an earth-element ability card. His ability is Earth Blast, which is a warrior ability that allows a cone earth attack. He produces four earth orbs and possesses the extra skills Bloodthirst, Elemental Retrieval and Guard Breaker. His auto-ability is HP Up+3%. He can be obtained from the Ability Card Shop or through Summoning.

Raiden is one of Kaze's summons.

The Soil Charge Triad that the Magun must use in order to summon Raiden is:

Followed by saying: "Annihilate! I summon you, RAIDEN!"

Raiden is a Lightning-elemental card.

The Japanese word Raiden (雷電?) is written ライデン? in katakana. The summon's name is instead ライディーン (Raidīn?). One possible source for this name is that it is a mix of "Raiden" with "Odin": In Final Fantasy VI Odin (オーディン, Ōdin?) does not extend the ディ (di?) sound, however there are other times in the series Odin's name has been written as オーディーン (Ōdīn?).