Raiden is an esper in Final Fantasy VI who can be acquired as a magicite. He is the upgrade of Odin.

Raiden resembles Odin, though he is mostly colored in blue with gold highlights on his armor and a blue cape. He is a tall knight who rides a mostly blue and white horse.

After the party obtained Odin's magicite in the ancient castle, they found the petrified statue of the castle's Queen. The Queen had been in love with Odin and her statue shed a tear on the magicite, imbuing it with power and transforming it into the Raiden magicite.

Raiden costs 80 MP to summon and uses Shin-Zantetsuken (True Edge in the Super NES and PlayStation translations), which inflicts Death on all opponents. It has a Hit Rate of 140, works against undead enemies, and will stall an enemy's final attack one turn, but fails on targets immune to Death. On level up, he provides a +2 boost to Strength.

Raiden is an effective summon to use against enemies vulnerable to Instant Death, as it has a high enough hit rate to be reliable. However, its MP cost is a bit high. His level up bonus is the best possible for physical fighters.

Raiden only teaches one spell but it is an extremely useful one; Quick allows the caster to take two additional turns that enemies and allies cannot act during. This is an all-around useful ability, especially when combined with relics to attack multiple times a turn or cast multiple spells a turn. E.g. if Quick is combined with the Soul of Thamasa, a character could cast five spells without interruption. 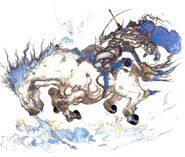 The Japanese word Raiden (雷電?) is written ライデン? in katakana. The summon's name is instead ライディーン (Raidīn?). One possible source for this name is that it is a mix of "Raiden" with "Odin": In Final Fantasy VI Odin (オーディン, Ōdin?) does not extend the ディ (di?) sound, however Odin's name has been written オーディーン (Ōdīn?) in design documents for the game[1] and in earlier titles.