Raiden is a wind-elemental Eidolon from Final Fantasy Dimensions II. It can be obtained as a signet for Maina to equip by completing Maina's third episode, "Frog vs. Frog".

In the original free-to-play versions of the game, Raiden's signet could only be obtained through the game's summon draw shop and could be equipped by any party member.

According to the official description of the summon from the free-to-play versions, Raiden is described as an upgraded variant of the Odin Eidolon, referring to Raiden being an upgraded version of Odin in Final Fantasy VI. Raiden's artwork is based on the summon's in-game sprite from Final Fantasy VI, while taking design elements from its original artwork by Yoshitaka Amano.

The following are the abilities Maina can learn from Raiden: 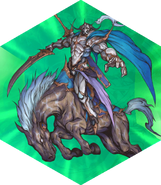 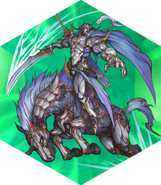 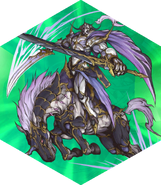 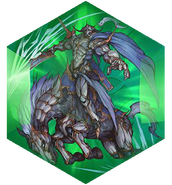 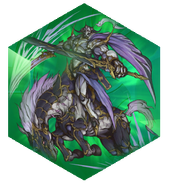 The Japanese word Raiden (雷電?) is written ライデン? in katakana. The summon's name is instead ライディーン (Raidīn?). One possible source for this name is that it is a mix of "Raiden" with "Odin": In Final Fantasy VI Odin (オーディン, Ōdin?) does not extend the ディ (di?) sound, however there are other times in the series Odin's name has been written オーディーン (Ōdīn?).