Raid on Narshe
Part of the Third Gestahlian Campaign

Biggs and Wedge †
Elder of Narshe

Armed with Magitek Armor, Biggs and Wedge are sent to Narshe to capture a recently discovered frozen esper, Valigarmanda. They are accompanied with Terra Branford, whom they control through the slave crown she is wearing.

Shocked by the appearance of Imperial Magitek Armor, the Narshe guards rush into action, but are no match. The guards are beaten back in a series of encounters, killing eight of them as well as some Silver Lobos and Megalodoths. The Imperial soldiers enter the Narshe Mines where they face Narshe's trump card, the Ymir. Once having defeated the beast, the team approaches the frozen esper that reacts to Terra's presence and starts flashing. Biggs and Wedge are presumably killed, while Terra—reacting differently to the esper—is knocked unconscious and rescued by Arvis.

Furious over the unexpected attack, the Narshe guards rush to Arvis's house to arrest Terra. They refuse to listen when Arvis tries to explain Terra was being controlled by the slave crown, and she has to make a run for it. Escaping from the guards, she falls into a mine shaft and blacks out again. Locke Cole of the Returners saves her, and together with eleven moogles prevents her from being captured and escorts her out of Narshe. They kill a Guard Leader and several Megalodoths and Silver Lobos in the process, causing Narshe to close its gates to the Returners. It would take the personal intervention of Banon, the leader of the Returners, to reconciliate with the people of Narshe.

Despite the Imperial aggression, Narshe insists on remaining neutral in the war between the Returners and the Imperials, although it takes steps to be better prepared in the event of future Imperial attacks (the esper is moved to the cliffs above the city to make it harder to reach). The Gestahlian Empire is not prepared to give up the frozen esper, and pays little respect to Narshe's policy of caution, as not long after the failed raid a larger force is sent under the leadership of Kefka Palazzo, initiating the Battle for the Frozen Esper. This marks a turning point in the relations between Narshe and the Returners, as the Elder of Narshe accepts help from them to stand against the Imperial invaders. Afterwards the two will ally against the Empire.

The raid on Narshe is one of the themes in the game's opening cinematic on PlayStation. 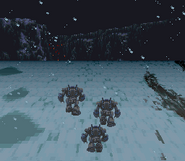 Biggs, Wedge, and Terra before their raid.

Shortly before the esper kills Biggs and Wedge.

Guards showing up to arrest Terra.

Terra cornered by guards in the Narshe Mines.

Biggs, Wedge, and Terra on the cliffs (PC).