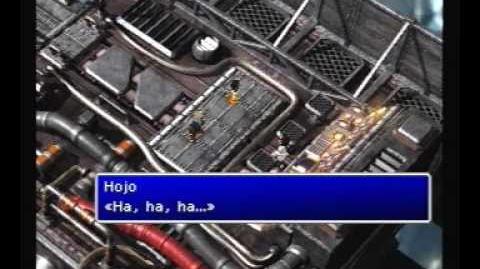 The glitch is performed by the player approaching the North Crater on the Highwind after defeating Diamond Weapon. A scene will trigger where Reeve Tuesti is in the Shinra Building' conference room with Heidegger and Scarlet and will call Hojo on his cellphone. After this a scene where Hojo is operating the Sister Ray's controls is meant to play.

The player can trigger the boss battle event straight from the scene where Reeve phones Hojo. During scenes like this the game is meant to be programmed to cancel character movements, but in this scene, when Reeve calls Hojo the field with Hojo operating the Sister Ray is shown. This is the area where the boss battle against Hojo occurs. If the player hold down, right and run buttons while the scene fades to Hojo's field, the game will consider the player to move towards the location, and triggers the boss scene and the battle against Hojo. Cloud is invisible on the field and in the PlayStation version there will be no music until the end of Part 2 except for the "Victory Fanfare" after defeating Hojo that keeps playing until the scene with Cloud and Tifa outside the Highwind.

Performing the glitch can be useful for speed runs or low level challenge games, but has little use for regular players as if the player skips the events of returning to Midgar they miss out on many useful spoils, such as Barret's and Cait Sith's ultimate weapons, and also the Behemoth Horn for Red XIII. The W-Item Materia is not missed as it can be excavated at Bone Village if missed here. They will also miss the last opportunity to read the Turtle's Paradise flyer in the lobby of the Shinra Headquarters if they missed it during the visit in Part 1.

Bugs and glitches
Community content is available under CC-BY-SA unless otherwise noted.
Advertisement