Forests around the world

The Ragtime Mouse, also known as Ragtimer, is a special creature in Final Fantasy IX whom the party can repeatedly encounter in various forests throughout Gaia. It is a quiz master who poses a yes or no question every time it is encountered. It flees if attacked (even if the player inflicts more damage than its maximum health), and the only way to defeat it is to answer all sixteen questions.

The Ragtime Mouse is encountered alongside True and False, which resemble

Forests around the world

Ragtime Mouse appears randomly in the forests on the world map. The number of times it can be encountered is limited per how far in the game the player is, but cumulative:

Thus it is possible to meet Ragtime Mouse 16 times in the endgame if it has not yet been encountered previously.

The Ragtime Mouse appears only after 20 seconds have passed on the world map since the player entered or since the last battle. This condition makes its chances of appearing twice in a row in the same forest seemingly very low. It is, however, perfectly possible to find it in the same forest repeatedly provided the player doesn't move for 20 seconds between each encounter. Every frame during which the player is running after this limit has a 1/231 or 1/365 chance to trigger an encounter with the Ragtime Mouse (1/365 is used only before getting the Blue Narciss and only before the first battle since the world map was entered).

The questions are asked randomly except for Question 16, which is always the last.

After answering the questions above:

The theme during Ragtime Mouse encounters isn't the regular battle theme, but a track called "Faerie Battle" that also plays during the friendly monsters battles. 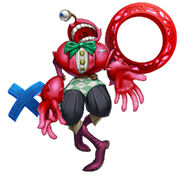 Ragtime Mouse appeared as a boss during the Final Fantasy series 30th Anniversary event. During the event, he would challenge players with multiple trivia questions revolving around the current fifteen main series titles, Final Fantasy Tactics, and Final Fantasy Type-0. The rank and rewards were dependent on the amount of questions answered correctly.

The card Ragtime Mouse is holding has a message present on the face of the card. The text is in Japanese and it reads: "Pop Quiz! FF10's theme is GUTS! True or false?".[1]

The money and the EXP received from the Ragtime Mouse is a Japanese language pun. Gokurōsan (ご苦労さん?) is "good job"; the number five in Japanese is Go; the number nine is Ku; the number six is Ro; and three is San. Writing 5963 can thus approximately phonetically be pronounced "good job". The Ragtime Mouse gives 23852 EXP, which divided among four party members is 5963 EXP each. It also gives 59630 gil.

Ragtime Mouse's reaction to being attacked.

The player gets a correct answer.

The name "Ragtime Mouse" is probably a mistranslation of "Ragtime Mouth" as the transliteration of the English words "mouse" and "mouth" is the same in Japanese.