Ragnarok Buster is one of Laguna's ground physical HP attacks and is learned at level 8. It has CP cost of 40, that can be reduced to 20, by mastering the ability for 130 AP. Ragnarok Buster has melee high priority and has Wall Rush as an added effect. 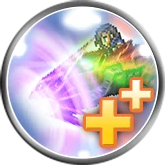 Ragnarok is an airship in Final Fantasy VIII. Its name is a pun on Laguna Loire's name, as the first three characters of his full name and that of the airship are the same in Japanese (ラ・グ・ナ, Ra-gu-na?). The ship is called "Lagunamov" and "Lagunarock" in the Spanish and Italian versions respectively.

The link is referred to even in the English translation when Laguna says, "I always wanted to ride that thing. Plus the name sounds so cool!" The name can even be interpreted as "Laguna 6", because roku means "six" in Japanese, suggesting there may have been at least five other "Laguna" ships.