The song used in the Nashmeira's Plea mission of FFXI: Treasures of Aht Urhgan. The low, profound splendor of the melody has made it a fan favorite. 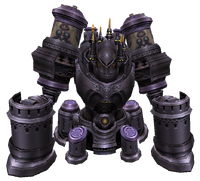 "Ragnarok" is a theme originating in Final Fantasy XI: Treasures of Aht Urhgan, as the final boss theme. It was composed by Naoshi Mizuta.

"Ragnarok" is included in the music player in the Memories of FFXI (Disc 4) album purchased at Burbost Souvenir Emporium for 100 gil.

"Ragnarok" is a downloadable track, as part of the Final Fantasy XI Music Pack along with Vana'diel March and Fighters of the Crystal.

A new arrangement and the original PlayStation 2 version themes can be bought from the shop for 3,600 gil.

"Ragnarok" is a downloadable track. It was released in PAL regions on August 17th.

"Ragnarok" appears as a Battle Music Sequence. It is available by default.

A solo keyboard arrangement of "Ragnarok" was played by Kumi Tanioka as part of the Fan Festival 2008.

A solo piano arrangement of "Ragnarok" was played by Kumi Tanioka as part of VanaFest 2012.