Galenth Dysley as Serah, reciting the lyrics of "Fighting Fate"

Ragnarok (ラグナロク, Ragunaroku?) is a creature from Final Fantasy XIII. It is the legendary beast a Pulse l'Cie must transform into to bring about the obliteration of Cocoon.

Lightning, Snow, and the others saw a phantom vision of this beast upon their branding as l'Cie. In the dream, they witnessed the creature besieging Cocoon's capital of Eden, but whether this was a glimpse of past events or a vision of things yet to come was unclear. What is clear is that Ragnarok is inextricably linked to their Focus. The nature of that Focus, and what must be done to fulfill it, remains to be seen.

Message of the Orbs

The most famous of the prophecies left by the seeress Paddra Nsu-Yeul concerns the descent of the monster Ragnarok in the great battle for Cocoon.

Long before this came to pass, the seeress named the two 'sisters' who would summon the beast. 'They shall come from the far north, and the black-haired one shall be of the family Yun, and the red-haired one of the family Dia.' The truth of the prophecy was later confirmed by the priests of Oerba.

This is the prophecy told by Lachesis, messenger of the magic world.

Ragnarok the beast shall bring down Cocoon. After the War of Transgression, two girls from the far north shall come to Cocoon, the nest of Lindzei, and transform into the beast that destroys it. Until the end of time, this day shall be known as the Day of Ragnarok.

Some of the fal'Cie of Cocoon and Gran Pulse desire for l'Cie to become Ragnarok and destroy Cocoon. By doing so, they hope to summon Etro's gate and be reunited with the Maker, the deity that created the world.

To bring back their Maker the fal'Cie need an ideal sacrifice—the deaths of millions of Cocoon citizens. Though powerful, Cocoon fal'Cie are prohibited from harming Cocoon because they are bound to its creation and maintenance. Instead, they use Pulse l'Cie who are given a Focus to destroy Cocoon.

This sparked the War of Transgression six hundred years before Final Fantasy XIII, putting both humans on Cocoon and Gran Pulse at odds with each other to ensure Ragnarok's coming. Oerba Dia Vanille and Oerba Yun Fang were selected from the village of Oerba to become Ragnarok and destroy Cocoon, but Vanille never transformed into the beast, forcing Fang to become Ragnarok alone. As Fang's incomplete form of Ragnarok left a huge scar on Cocoon's shell, Etro took pity on the people of Cocoon and drained Ragnarok of power before placing Vanille and Fang into early crystal stasis, their Focus still incomplete.[1] Later, Barthandelus took the Pulse Vestige to Cocoon where the pair would reawaken centuries later to finish the job.

Six hundred years later, Barthandelus had taken peaceful political rule over Cocoon as Primarch Galenth Dysley. After awakening from crystal stasis Vanille remembers their previous Focus, but hides her knowledge from Fang as the latter cannot recall anything of Ragnarok.

Vanille goes along with Fang's attempts to revive "their" memories, attacking the Cocoon fal'Cie Kujata. The incident separates the two, Vanille looking for a way to escape to Gran Pulse, while Fang joins the Cavalry under Cid Raines.

During the Purge, Vanille boards a train headed for Gran Pulse, meeting Lightning, Hope, Snow, and Sazh after the incident at Hanging Edge flies out of control. The other four are branded by Anima with the Focus to become Ragnarok and destroy Cocoon, the same fal'Cie that used to reside in Fang and Vanille's home town of Oerba and originally branded the pair. Barthandelus had hidden Anima along with Vanille and Fang in the Pulse Vestige left on Cocoon.

Vanille continues to hide her knowledge and later reunites with Fang and everyone else upon the Palamecia. The group meets Dysley, who reveals himself as Barthandelus and taunts Fang's inability to remember her fate. On Gran Pulse, Fang confronts Vanille, who admits she was hiding the secret so they would not have to transform into the beast again.

Barthandelus appears to them as they scour the ruined city of Oerba, first taking the disguise of Serah Farron who chants to legend of Ragnarok. Barthandelus reveals his true form to convince them by force, while stating his back up plan to have Cocoon's people destroy themselves in their stead. Vanille, Fang, and the rest of the party resolve to save Cocoon rather than destroy it.

When the party passes through Edenhall and descends into Orphan's Cradle, Barthandelus orders them to accept their destiny and kill Orphan and the whole of Cocoon. They refuse, and Barthandelus decides to eliminate them and await new l'Cie. The protagonists prove stronger than him and Barthandelus sinks into Orphan's pool, and his extension, Menrva, flies into the pool to awaken Orphan, the fal'Cie having assimilated Barthandelus unto its shell.

After a lengthy battle, Fang wavers and begins the transformation; the other party members save Vanille, but transform into Cie'th. Vanille pleads with Fang to reject the fate of Ragnarok, but Fang morphs into an inferior version of the beast. She attacks Orphan, and though she destroys the barrier around the fal'Cie, she is unable to kill it. Orphan resorts to torturing a restored Fang to make her embrace her hatred and transform into Ragnarok again.

Vanille rejects Orphan when asked to become Ragnarok, and the other party members come out of Cie'th form and blast Orphan, crumbling its shell into its pool as the fal'Cie rises into its true form. As Orphan has shown its true colors as an enemy of Cocoon, the party resolves to defeat Orphan without Ragnarok's aid. With Orphan no longer keeping Cocoon airborne, the floating continent begins to fall.

Vanille and Fang transform into Ragnarok together and smash through Cocoon's shell and use an erupting basin of lava on Gran Pulse to form a column of volcanic rock. Ragnarok envelops the floating continent in crystal, saving the world with Vanille and Fang crystallized within the crystal pillar.

Ragnarok, like the Eidolons, was designed to have connections to the Goddess Etro, despite not being her creation. It incorporated design elements from several Eidolons, such as the many arms of Hecatoncheir, frills from Brynhildr, and Alexander's crown. Its incomplete form was designed as a fusion between Fang and the complete Ragnarok.[2]

Ragnarok's theme is a haunting melody most prominently featuring a Latin chorus. It references Ragnarok's role to destroy Cocoon. 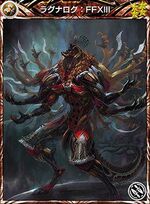 In the Final Fantasy XIII mythology Ragnarok is to bring the destruction of the world, which the fal'Cie believe will bring about the Maker's return and thus remake the world anew, similar to the Norse legend. The death of the Cocoon fal'Cie after Cocoon's fall can also be seen as similar to the gods' death in Ragnarök in Norse mythology.

The characters of Fang and Vanille are based on the Ragnarök myth of Líf ("life") and Lífþrasir ("eager for life")—the only humans who will survive Ragnarok. They sleep through the destruction of the earth and upon awakening will find the earth green and verdant again. Líf and Lífþrasir will become the progenitors of a new race of humans, and their descendants will inhabit the world. This is congruent with the idea that Fang was originally envisioned as a male character.