Unleashes a flurry of blows on a single enemy.

Raging Fist, also known as Pummel,[1][2] is Sabin's level 1 Blitz technique in Final Fantasy VI. It deals physical damage to one opponent that ignores Defense, making it a basic yet strong attack.

Raging Fist is performed by Sabin leaping toward the enemy and pummeling it with his fist in rapid succession.

Raging Fist is the only Blitz required to use in the story, upon first playing Sabin when facing Vargas. Successfully using the technique ends the battle.

Raging Fist is available to Sabin by default.

Gogo can also use any Blitz techniques that Sabin has learned by equipping Blitz in Gogo's ability menu. This allows Gogo to use Raging Fist.

When the combination is entered, Raging Fist will be randomly used against one of the opponents.

As a physical damage ability, it deals damage with the following formula:

Raging Fist cannot be blocked, and ignores the target's Defense, meaning it will hit for full damage provided the attack does not miss.

Raging Fist can do considerable physical damage to a single opponent, and its ability to ignore their Defense means it will always be stronger than a basic physical attack. Because its combination is easy to remember and input, Sabin can reliably use Raging Fist in any circumstance. The only drawback to the ability, as with other Blitzes, is that it cannot be targeted at one enemy and will hit a random opponent, meaning Raging Fist may sometimes be used against an opponent that would easily be defeated by another skill and miss an enemy that had higher HP.

In comparison to other Blitz techniques, Raging Fist is one of only two, alongside Meteor Strike, that deals physical damage and thus relies on Sabin's Strength stat, a naturally high stat for him. Meteor Strike deals more damage than Raging Fist particularly against single targets, where Meteor Strike's damage is doubled. However, many enemies, such as flying enemies and some bosses, are immune to Meteor Strike, meaning Raging Fist is more reliable.

For the most part, later Blitz techniques that use magic damage—namely Aura Cannon, and especially Phantom Rush, once acquired—should be used instead. These spells outclass Raging Fist and also ignore Defense. Because these and the vast majority of damaging Blitz techniques are magic attacks that use Sabin's Magic stat to determine damage, players should focus on boosting Sabin's Magic with by leveling him up with magicite equipped to boost his Magic stat; as a consequence, Raging Fist will fall behind.

Due to Gogo's naturally higher Magic stat, Gogo benefits more from using the magic-based techniques than Raging Fist, but can use Raging Fist if the enemy resists magic. 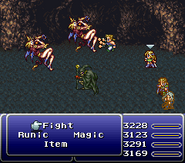