Final Fantasy Wiki
Register
Don't have an account?
Sign In
Advertisement
in: Characters in the Chocobo series, Chocobo to Mahou no Ehon: Majo to Shoujo to Go-nin no Yuusha Characters

Raffaello (ラファエロ, Rafaero?), also known as Raffy, is a character from the Chocobo series. Raffaello has the younger twin sister named Elly.

Prior to the story, Raffaello was the Guardian of Darkness, the Magic Beast of the Black known as "The Destroyer", a demon who fed on suffering, who almost destroyed all of Lostime. When it was sealed away by the oracles, the three Guardian Beasts created the Bell of Oblivion in order to relieve Lostime of its pain, and then sealed all of Memoria away from the rest of the world. However, before being sealed, the Destroyer left its Crystal of Dark Destruction, renamed Timeless Power, in the outside world in hopes that would allure an ideal pawn to help him break the seal.

That day came when the treasure hunters Chocobo and Cid found Timeless Power as they, Irma, and Volg end up in Lostime. Deciding to use Chocobo to help restore the denizens' memories, the Destroyer appeared one night upon Chocobo and Shirma as an egg that hatches into a baby Raffaello, devoid of all memory of his true identity. Over a short period of time, Raffaello grew up rapidly while entering each Shrine. While some regarded Raffaello as their savior, Raffaello refuses such recognition as he feels the evil of his former self.

Once he enters the Shrine of Light, Raffaello assumes his adult form with full memory of who he was as he goes to the top of the tower in order to return Lostime's memories. Once that is done, Raffaello assumes the form of the Priest of Darkness and gloats of how his plan came together as he summons the Floating Fortress that was originally the Temple of Darkness. After turning Croma in energy and absorbing her, Raffaello retreats into the Floating Fortress to complete his resurrection.

However, the good Raffaello attempts to fight off the Destroyer's hold over him and keep Croma alive until Chocobo arrives. Once the Destroyer is destroyed, Raffaello is free of his former self and becomes a human child as he saves Chocobo with the airship. Soon after the town has been renamed Foundtime, Raffaello thanks everyone before he leaves in the airship to atone for his actions.

After clearing Chocobo's Memories, a letter from Raffaello can be found in the mailbox. He writes that he is in a town called Talkas and that he will board a train to parts unknown. 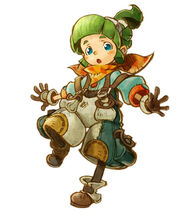 Raffaello appears going simply by Raffy. Being the protagonist in the third story, Raffy is an airship pilot from Luddock who lives with his twin sister Elly. Having no confidence in himself but wanting to fly like his mother, Raffy joins the Roman Cup airship contest in hopes of winning.

In English version of Final Fantasy Fables: Chocobo's Dungeon, he is voiced by Ted Sroka. In Chocobo's Mystery Dungeon Every Buddy!, his younger and older forms are voiced by Brianna Knickerbocker and Khoi Dao, respectively. 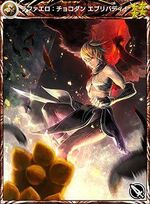 Raffaello appears in his Priest of Darkness incarnation as a Rarity 4 Star Ability card. 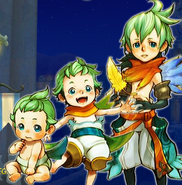 Raffaello is an alternate spelling of Raphael. [view · edit · purge]Raphael is an archangel of Judaism, Islam and Christianity, who in the Christian tradition performs all manners of healing. In Islam, Raphael is the fourth major angel; in Muslim tradition, he is known as Israfil.

Raffaello Sanzio da Urbino, known as Raphael, was an Italian painter and architect of the High Renaissance whose work is admired for its clarity of form and ease of composition and for its visual achievement of the Neoplatonic ideal of human grandeur. Together with Michelangelo and Leonardo da Vinci, he forms the traditional trinity of great masters of that period.

The Chocobo series
Community content is available under CC-BY-SA unless otherwise noted.
Advertisement