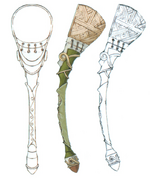 Rackets (ラケット, Raketto?), also known as Paddles, are a recurring type of weapon in the Final Fantasy series. They are swung, in some cases, like lacrosse rackets and are used for long-range physical and magic attacks.

Rackets are one of the type of weapons used by Dagger and Eiko. They are used for long range attacks.

Rackets are the main weapon used by the Selkie tribe. The user can attack with a three-hit close range combo, most rackets feature long range Focus attacks but the Solid Racket and Butterfly Head as well as their upgraded forms use powerful melee attacks instead.

Paddles are the melee weapon of choice for the Selkie tribe.

King Leo uses a Racket which closely resembles the Butterfly Head and the Queen's Heel as his weapon of choice in the final battle.