Detects by Sight
Detects by Sound
Detects Low HP
List of Qutrub Enemies
Qutrub wrap themselves in bandages to slow the decomposition of their rotting bodies. Unlike the shambling undead that are afflicted with a curse after dying, these corpse-eating ghouls are beings that have succumbed to the charms of the Lamiae while still alive. Through dark rituals, they willfully attain an undead existence in order to serve their foul mistresses for eternity. Seemingly still afflicted by the desires of the living, the qutrub hoard valuable trinkets, and feast on the dead to maintain the traces of flesh and blood remaining to them. It is said that the blade carried by each qutrub is infused with their discarded life essence.

Strangely, while they possess approximately triple the normal HP of other mobs their level, qutrub also take twice the normal damage from both physical and magical damage.

The qutrub carry two blades, but can be made to drop one by attacking their right arm. Spinal Cleave is only used once they lose their first blade and attack with their fists or dagger. Qutrub will periodically switch between their fists and the blade on their back which contains their discarded life essence; should this second blade break, the Qutrub's access to the attack Spinal Cleave will cease, since this attack makes use of the second blade.

A Qutrub in Middle Eastern folklore is a type of jinn or demon, similar to a ghoul because it was said to haunt graveyards and eat corpses. 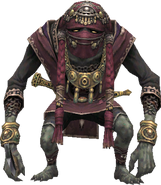