The Secundus l'Cie of the White Tiger Crystal, Qun'mi possesses the special ability to manipulate all sorts of armaments and amplify their powers beyond mortal limits. Confident and perhaps even conceited, she does not take kindly to being outdone or upstaged. That said, she has not been a l'Cie for very long, so she has acquiesced to her current position—for now.

Qun'mi Tru'e is a non-player character in Final Fantasy Type-0 who also appears in Final Fantasy Agito and Final Fantasy Awakening. A recent Secundus l'Cie of the White Tiger Crystal, she draws out the power of weapons in battle in conjunction with her magitek armor, Dáinsleif.

Qun'mi wears a Militesi armor with brown boots, gray overalls and brown gloves. She wears a breastplate, pauldrons, and high collar. Her main identifying feature is her helmet, shaped like a tiger's head that sports a feline mask. Her l'Cie brand is just above her right breast (although concept art shows it on the back of her left hand

). She has short pale blonde hair and brown eyes

, but is not seen without her helmet in Final Fantasy Type-0. When her brand is activated, her eyes turn green. According to the Rubicus Qun'mi is 24 years old and 5'3" tall.

Is this the best the Dominion has to offer?

Qun'mi has a strong and distinct personality, being a new l'Cie and thus not having lost much of her humanity yet. Her primary trait is her confidence in her abilities and Militesi superiority. She disdains weak or predictable enemies, but can understand and empathize with those who wish to protect what they value.

As a White Tiger Secundus l'Cie, Qunmi's power is over the teknology developed with the White Tiger Crystal. She can enhance weapons and other teknology to greatly surpass their base potential, operate machinery no ordinary human can, and restore malfunctioning machines to life with a wave of her hand.

Following Qun'mi's failure to capture Akademeia, it is decided that she will drop the Ultima Bomb on the Lorican Alliance, sacrificing herself in the process. Though knowledge of the defeat is supposed to be limited to those of high rank, Ines Belfarre of the Militesi forces has learned of the situation and asks Qun'mi why she alone is bearing the consequences. Qun'mi claims the decision was hers, and implies Ines would take her place. Ines begins to cry, and Qun'mi attempts to console her by saying that her memory will be erased. Ines is selected to succeed Qun'mi as captain due to her talent despite her youth and tendency to act emotional. Reassured by the idea that her sacrifice would not be in vain so long as someone continues her work, Qun'mi rests her hand on Ines's shoulder, then leaves her to weep.

Due to being a l'Cie Qun'mi does not instantly die in the bombing of Lorica, but is left dying with a Focus to find a successor to her powers. Captain Ines, having concluded that Qun'mi has entered crystal stasis as she never returned, seeks vengeance on Class Zero for causing the original mission to take over Akademeia to fail. When Class Zero patrols the borderlands, Machina Kunagiri comes across the dying Qun'mi who asks him to become her successor. He rejects her and attacks her with a fireball. Qun'mi gathers the last of her powers and sends it out in a flash of light before crystallizing. Back in Ingram Brigadier General Qator Bashtar inherits Qun'mi's role as the White Tiger Secundus l'Cie.

Qun'mi admires imperial Marshal Cid Aulstyne and helped him develop the crystal jammer, a weapon that disables enemy Crystals. Leading an invasion squad against Akademeia, Qun'mi uses the jammer to disable the academy's defenses as she holds the city hostage for Cid Aulstyne. The jammer in an imperial flagship is destroyed, and she encounters resistance when confronted by two Agito Cadets, Machina Kunagiri and Rem Tokimiya. She uses Dáinsleif's crystal jammer to make the pair unable to use magic, and easily overpowers them, before entering the magitek armor to finish them off.

Ace, Seven, and Jack come to Machina and Rem's aid, summoning Odin to cripple Dáinsleif, much to Qun'mi's surprise as the crystal jammer was supposed to disable all magic. After the Class Zero members do further damage to the MA, Dáinsleif explodes and Qun'mi falls back with her surviving forces. The crystal jammer inside the magitek armor is destroyed. The empire fails to conquer Akademeia and rumors spread among its cadets that imperial prisoners of war had gossiped about Qun'mi being in love with Cid Aulstyne, marveling a l'Cie should have that much humanity left.

Qun'mi is involved in Operation Northern Dawn to drop the Ultima Bomb on the Black Peristylium. She augments the bomb with her l'Cie powers, ensuring the Lorican Alliance is obliterated. Things go awry and she finds herself fused into the Lorican ground where she remains for a time, unable to free herself. During Class Zero's escape from Ingram, the cadets end up in the Old Lorica Region where Machina happens upon Qun'mi, still stuck in a large stone. She transfers her l'Cie brand and powers unto a willing Machina after asking if he wants to become a White Tiger l'Cie. Her helmet falls off and she enters crystal stasis. Machina takes up Qun'mi's helmet and becomes a l'Cie, inheriting her Focus.

Qun'mi had helped design teknology that replicated her power, the so-called "Engine 9", and thus had made herself obsolete in the eyes of Marshal Cid, who preferred the more powerful Primus l'Cie Nimbus.

Dáinsleif is the final boss of Mission 1-1. It is fought twice, first by Odin, then by Ace, Jack, and Seven.

Qun'mi retains her moves during her battle against Machina and unleashes purple projectiles from her left hand. Like Rem, she is faster and quicker when she deals more damage to her enemy in a close range. Her strongest skill is to form herself Dáinsleif to deal quick damage by charging towards her opponent. She is immune to freezing while in this form if she is hit by either a mage or Caetuna's strongest skill. She is fought as a boss twice, but is weaker when recruited by the player.

In later updates, Qun'mi has another form named Kaya whose style resembles Rem's when attacking her opponents using her katars. It requires Qun'mi in 3-Mythic Stars and 30pcs Revenge Augite shards within the Augite System. When Qun'mi confronts Gilgamesh Ashur, he traps her in the rubble, but with Kaya's assistance, she transforms into Kaya to break free and defeats him. Once Kaya is acquired, Qun'mi reveals herself to be Kaya by removing her mask and her outfit transforms to her primary attire.

The "Nimbus and Qun'mi Squads" are two particularly exemplary units of the Royal Guard in Final Fantasy XV: Episode Ardyn.

In the English version, she is voiced by Aimée Castle. 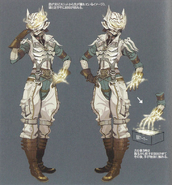 Qun'mi passes on her Focus.