An exceptionally talented young woman who became SeeD in fewer years than anyone before her. As Squall's assigned instructor, Quistis feels a personal responsibility for him.

Quistis is a playable character in Final Fantasy Record Keeper who could be recruited during the Challenge Event A Planted SeeD. She was available via two separate Quests shortly thereafter: "Complete Shores of Wisdom - Hard" on November 15, 2015; and "Complete Dollet Classic (VIII)" through the system's retirement. She was reissued in A Meeting Beyond Time, Rains of Ruin, and A Special Place as well.

Quistis becomes a high-level Black Mage and leaves the Blue Magic for Soul Breaks. She has above-average Attack and Magic as well as average Resistance and Speed, but low defensive stats. She can take on many different roles. As a rare whip-wielding ally who can also ignore distance, Quistis may aid the party by stalling an enemy for a few turns.

After increasing Quistis' level cap, it unlocks the Record Materia Keen Eye, which increases the damage dealt by 10% upon hitting an enemy's weakness. 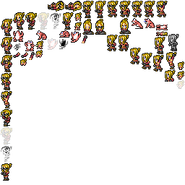