An icon sprite of Quistis appears in the memorycard file manager.

Quistis makes a small cameo as a tutor from the in-game manuals. Along with Irvine, she explains the game's accessory system.

Quistis appears as a playable character.

Quistis appears as an ally and a summonable Legend. She is depicted in her Final Fantasy VIII default outfit. Her EX ability is Micro Missile.

Quistis is a playable character who could be recruited during the Challenge Event A Planted SeeD. She was available via two separate Quests shortly thereafter: "Complete Shores of Wisdom - Hard" on November 15, 2015; and "Complete Dollet Classic (VIII)" through the system's retirement. She was reissued in A Meeting Beyond Time, Rains of Ruin, and A Special Place as well. 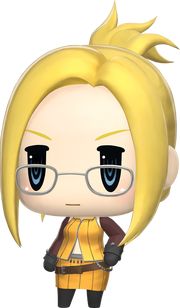 A Cunning Strategist
Quistis is a wily and worldly woman who knows just what's needed to grease the wheels of the political machine. When it came time to investigate Icicle Ridge, she immediately readied a juicy bribe for the thane—the fastcraft—but quickly shifted strategies in light of new information. While you might think her capricious for this, that is most certainly not the case. Quistis merely reallocated her resources to where they would do the most good. Once she learned Reynn and Lann were the Jiants from the Hills, she considered the prophecies and decided that helping the twins progress was a more productive course of action.

SeeD's Leader
Quistis is SeeD's leader. Her organization controls Balamb Garden and the airships—highly advanced technology that is beyond the ken of even Grymoire's brightest minds. Funny, then, that even with all that at her disposal, one of her greatest passions is said to be a card game.

The Wiser Choice
When Quistis went up against Faris, she had no idea who she was dealing with. Faris's kupirate crew was one thing. But when Syldra appeared, Quistis knew she was done for. Thus she challenged Faris to fisticuffs not because she thought she could win, but because taking a few punches seemed a lot better than, you know, dying.

Squall's Influence?
Quistis is too busy running SeeD to step out onto the front lines. Is that why she wears glasses? Because she doesn't have to worry about breaking them?

Then again, in some A-Worlds, she doesn't wear glasses... Maybe she only does that when Squall is around. Or maybe that's just, uh, spec-ulation.

The following is a list of quotes uttered by Quistis when talking to her.

You know, at one point I wanted to become an instructor.
I never thought fate would lead me to this Garden, let alone that I'd be fighting with the League of S to save the world.
Life is always full of surprises, am I right?

Sorry, you two. There have been some...developments that make it even harder for me to give you full run of the place.

The machines you encountered in Midgar, under Figaro Castle? Those were originally discovered here in Balamb Garden.
We thought the machines might help Shinra deal with the Mirages while they investigated.
Of course, we would never have lent them out knowing what we know now.
But! What's done is done. We can't take it back. We can only try not to make the same mistakes again.

Could it be possible that every technologically advanced facility in the world is in reality some kind of ancient Mirage?

The manual will tell you how to operate the airship.

We need to ensure the safety of our world.

Quistis appears represented in one card of the Aqua element. She is depicted in her Final Fantasy VIII artwork.

Quistis appears on a Triple Triad card in the version available via Final Fantasy Portal App. The card has different values than the one in Final Fantasy VIII.

Quistis appears in the Dragon Quest & Final Fantasy in Itadaki Street Portable edition of the Monopoly-like video game available only in Japan for the PlayStation Portable. Although not a playable character, she assists the player in learning the game through the tutorial mode, giving helpful advice as the player's instructor.

Quistis reappears in a mobile-phone edition of Dragon Quest & Final Fantasy in Itadaki Street Portable. She once again assists the player in the game as their instructor.

In Shiro Amano's manga adaptation, Quistis Trepe gets a recurring cameo as the main character's idol and fanboy obsession, but in the original translation her name was mistranslated into "Kistis Tulip". The manga's main character, Toto, collects everything involving her, including fake autographed photos and life-sized dolls. He even attempts to defeat three evil dragons with the request of meeting Quistis in person as payment.