Qufim Island is a location in Final Fantasy XI.

These mysterious rifts are disturbances in the fabric of time and space. It is from here that extradimensional invaders of unknown origin, collectively known as "Voidwalkers", breach into Vana'diel. To stem the tide of invasion, adventurers may volunteer themselves in Voidwatch operations to dispatch these intruders at the source. The fiend Kaggen can be found at the Planar Rifts here.

An undersea tunnel to the south leads to the Grand Duchy of Jeuno.

A tunnel in the northwest leads to the Behemoth's Dominion.

Delkfutt's Tower can be entered from Qufim Island.

A Swirling Vortex found in the tunnels of Qufim Island transports adventurers to the Misareaux Coast in the Tavnazian Archipelago.

Adventurers in possession of certain items may be granted access to the dreamworld of Dynamis at the hieroglyphics found here.

The Transcendental Radiance found here will open a gateway for adventurers in possession of a crimson traverser stone to the Empyreal Paradox, in the parallel realm of Abyssea. 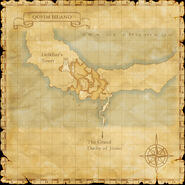 A map of Qufim Island.

An undersea tunnel leading to Jeuno.

This section about a location in Final Fantasy XI is empty or needs to be expanded. You can help the Final Fantasy Wiki by expanding it.
Final Fantasy XI
Community content is available under CC-BY-SA unless otherwise noted.