Quezacotl is one of the first two Guardian Forces available in Final Fantasy VIII. It is a Thunder-elemental bird-like being. Its name is shortened from "Quetzalcoatl" to Quezacotl due to the character limit. It also makes appearances in other games in the series.

It learns HP-J, VIT-J and Mag-J naturally, as well as elemental attack and defense junctions. Its unique command is Card Mod, which lets the player turn enemies into Triple Triad cards, and its refine abilities let the player make Thunder and Wind magic from items, mid level magic from low level spells, and various items from Triple Triad cards.

Quezacotl is a pale green winged creature with darker yellow wing-tips and darker green patterns around its body. It has no legs, but has an elaborate tail. Though bird-like, its body appears smooth rather than feathery.

Obtaining Quezacotl in the Steam version earns the player the achievement Quezacotl.

Quezacotl's attack, Thunder Storm, is a Thunder-elemental attack that damages all enemies. Quezacotl's summon time is 13.3s, which, according to the Final Fantasy VIII Ultimania, allows the player to boost its damage to around 180% of normal damage using a regular PlayStation controller.

Abilities learned naturally by Quezacotl are listed below:

Quezacotl is a lightning-elemental Level 8 GF Card in Triple Triad used for playing the minigame and for turning into 100 Dynamo Stones with the Card Mod. It is won from Mayor Dobe in Fishermans Horizon.

Quetzalcoatl appears as a Rank 4 Summoning ability and a boss.

Quezacotl from Final Fantasy VIII appears as a lightning-elemental card.

Quetzacotl is the final boss in the dungeon Akademia Anyder.

Quezacotl is invaluable if the player wants to permanently defeat X-ATM092 during the Siege of Dollet. Its refine abilities let the player make high level Thunder magic which X-ATM92 is weak to, and it allows elemental attack junctions to boost the power of physical attacks by junctioning Thunder magic. It also deals good damage to X-ATM092 if summoned, although simply casting magic is faster.

In the 2000 film version of Charlie's Angels, two boys are playing Final Fantasy VIII and are controlling Squall and Quistis in a battle in the Training Center. They are battling two Grats, Squall is seen preparing to summon Quezacotl. The Thunder Storm name appears at the top of the screen before changing view point, but the attack is not shown.

When summoning Quezacotl in the PC versions of the game, the first three of Thunder Storm's four sound effects are strangely replaced with the audio for summoning Phoenix. This is fixed in the Remastered release. 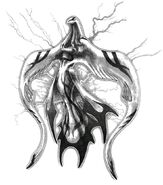 Quezacotl in the menu.

[view · edit · purge]Quetzalcoatl is one of the major deities in ancient Mesoamerican mythology. Quetzalcōhuātl means in the Nahuatl language "feathered serpent". Due to the many civilizations worshiping the same deity using different names for it in the span of almost 2,000 years, the exact attributes and significance of this god varies.

Most stories, though, agree upon Quetzalcoatl being the god of the morning star and being known as the inventor of books, the calendar and the giver of maize to mankind. The worship of Quetzalcoatl was, in some religions, connected with human sacrifices, while in others, opposed to human sacrifices.

Quezacotl's name in Final Fantasy VIII was shortened from Quetzalcoatl due to name size constraints. It is known as "Golgotha" in the French translation and "Quetzal" in the Spanish and Italian translations.

Quezacotl's French name, Golgotha, is interpreted as "Place of the Skull", and is the name of a hill beyond ancient Jerusalem as attested in the Gospels of the New Testament. It is written that Jesus of Nazareth was escorted to the summit with two thieves so that his crucifixion would be carried out.