Final Fantasy Wiki
Register
Don't have an account?
Sign In
Advertisement
in: Final Fantasy: Legend of the Crystals characters 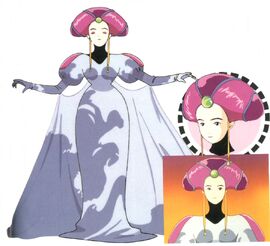 Queen Lenna Tycoon is a character in Final Fantasy: Legend of the Crystals. She is the Queen of Tycoon, 200 years after the events of Final Fantasy V. Her main role throughout the story is to task the heroes with the mission of stopping Ra Devil from becoming Deathgyunos by retrieving the Crystals.

Queen Lenna is a tall young woman who wears white robes and has a pink helmet under which she has long blonde hair.

She is a kind Queen, looking out for not only the people of Tycoon, but also the entire planet when Ra Devil steals the Crystals.

It's assumed that Lenna is a direct descendant of Lenna Charlotte Tycoon. She rules over the kingdom of Tycoon and makes sure that the Wind Crystal is safe.

She first appears in Episode 1, where Blue Mage warns her that the Crystals are going missing and the world is in grave danger. Queen Lenna vows to protect the Wind Crystal of Tycoon as the last hope to restore order to the world. She sends Valkus and the Iron Wings to make sure the Crystal is safe.

Queen Lenna appears later when the heroes are brought before her at Tycoon. She tells them of Deathgyunos, the God of Oblivion, who will destroy the world if he's reborn. Lenna tells the heroes that in order to prevent Deathgyunos from returning, they need to make sure the Crystals are back in order. She then sends Prettz and Linaly to find the Dragon which can transport them to the Black Moon where they will combat Ra Devil, offering a hefty award of gold.

In the end, the heroes recover the Crystals, and Queen Lenna restores them to their rightful places before each character goes their separate way.

Queen Lenna in the anime.

"Lenna" is the Anglicized form of Lena. [view · edit · purge]Lena is the Russian diminutive form of Yelena, Елена ("Ellen" or "Helen", meaning "light"), as well as an abbreviation of the name Magdalena ("from Magdala", Magdala meaning "tower"). Lena is a name in Hebrew origin that means "illustrious".

Final Fantasy: Legend of the Crystals
Community content is available under CC-BY-SA unless otherwise noted.
Advertisement