Quan's Dwelling is a location in Final Fantasy IX, situated near the city of Treno. It is a cave filled with natural gas fissures and a hot spring. It is also a location for two Stellazzio coins.

At the bottom of the cave, there is a healing spring, which fully restores the active party's HP and MP.

Vivi was raised in the dwelling after being found by Quan, and there are height measure markings on the wall, the last of which reads "Six weeks since I adopted Vivi. Still too small to eat." After Quan's death, Vivi left for Alexandria. He later has a chance to return to the cave when the party visits Treno during the card tournament, and Zidane can join him and learn about Vivi spending his early childhood in the cave.

The party can visit the cave with Quina Quen and Vivi when they have an airship. Quina hallucinates a pile of food on the table and Quina's master, Quale, finds the party there. Quan's spirit reprimands Quale and praises Quina's imagination, saying Quale still has a lot to learn on the ways of the gourmand, being Quale's old master. Vivi is excited to see his grandpa again, but Zidane, who accompanies the others, can't see Quan's spirit, which dissipates into thin air.

The main cave has a sand floor with hot springs at the bottom and a natural stone bridge crossing it to the dwelling at the back of the cave. Touching the springs heals the party's HP and MP. In the bottom right corner the party can find Stellazzio coins: Scorpio, and after obtaining every other coin, Ophiuchus.

The dwelling is in a state of disrepair and empty. The writing on the wall is where Quan used to measure Vivi's height. During the event with Quina the layout of the dwelling momentarily changes to include a pile of food on the table. The way to the right leads to the Fishing Post. 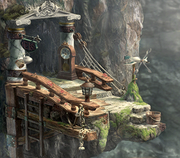 The balcony outside is where Quan used to fish, and where he originally caught Vivi. This is where Zidane finds Vivi if Vivi was prompted to visit the cave during an ATE. The clock is stopped, and when inspected, is implied to give the time Vivi left for Alexandria. After the event in the cave with the Qus, the player can find an add-on in the clock. As part of the Chocobo Hot and Cold sidequest, the player can look over the ledge and see foam at the bottom, then use a Dead Pepper to dive Choco off the ledge to find Dagger and Eiko's best physical weapon.

Visiting the dwelling during the card tournament[]

If Vivi stays in the city, the second round opponent in the card tournament will change, and the player has a chance to win the rare Namingway card. If Vivi is sent to the dwelling, the player controlling Zidane can leave Treno for the dwelling and meet Vivi there, who tells Zidane of his time under Quan's care. Vivi then joins Zidane's party. The player can still get the Namingway card from the Desert Palace later.

If both Quina and Vivi are in the party, and the player visits Quan's Dwelling after obtaining the Hilda Garde III, Quina sees a gigantic pile of food on the stone table. They begin eating but Zidane, standing well out of the way of Quina's frenzy, does not see anything. After asking Quina what they are eating, Quina notices there is no food on the table. Smelling something, Quina runs outside where they see Quan.

After some dialogue, Quale and Vivi enter. Vivi is excited to see his grandpa again, while it is revealed that Quan is Quale's master. Quan says a gourmand is more than just somebody who eats everything and is nothing without an imagination, telling Quale they have much to learn, while Quina is on the right track. Quan disappears, and Zidane says he still saw nothing. Afterwards, the player can look into the clock to receive a pair of Running Shoes.

Quan's Dwelling holds the Stellazzio Coin Scorpio, and after giving all twelve coins to Queen Stella, the Ophiuchus coin will appear in the same spot.

If Quan's Dwelling is visited when the player is in control of a blue or gold Choco, and has some Dead Peppers, Choco will dive off the ledge, opening a chest otherwise impossible to find, holding the Tiger Racket. It is the most powerful physical weapon for Dagger and Eiko.

The entrance to Quan's Dwelling.