The Qu's Marshes are the home of Qu, including Quina, and their master, Quale. They are exclusive to the world of Gaia in Final Fantasy IX.

If the player has Quina in the party when entering the part of the marsh where the frogs reside, they will be able to go frog catching. Each frog caught powers up Quina's Blue Magic spell, Frog Drop, and if the player collects enough frogs Quina will receive items. Catching 99 frogs will challenge Quina's master, Quale, who hands over Quina's ultimate weapon upon defeat.

Qu's Marshes are home to two moogles, Mogster and his brother, previously seen in ATEs; Mogster is on hand to answer any questions the player may have. Monsters also inhabit the swamplands, varying by location.

When staying at the Lindblum Castle, Zidane can survey the area with a telescope, and find a marshland under the Mist, commenting "weird things" are probably living there. The marsh on the Mist Continent can be accessed the first time after leaving Lindblum on foot. Quina is found here catching frogs, and in the Master's House, Zidane and friends will find Quale. When Vivi notes Quale resembles his grandfather, Quan, Quale pretends not to know anything about him. Quale asks Zidane to take Quina with him on his quest so Quina can become a better gourmand. When Quina is in the party, the player can play frog catching in the pond.

After the Battle of Lindblum, Zidane and friends decide to venture to the Outer Continent and recruit Quina's help in finding the route to Fossil Roo and the entrance to a labyrinthine excavation site hidden in the marsh.

The frog pond on the Outer Continent is fragmentary with many small puddles. This marsh can first be accessed after crossing the Fossil Roo to the Outer Continent, and it is south from the big forest that conceals the Black Mage Village. After getting the Blue Narciss, the player can return to the marsh as often as they like.

The frog pond in the marsh on the mainland of the Forgotten Continent is one large pond. The player can first get there when they hear about Ipsen's Castle and once they get their own airship they can visit the pond whenever they want.

The marsh on an island south of Forgotten Continent can be visited only on Blue Narciss, an airship, or flying Choco. It has three equally sized puddles.

Frog catching is a minigame played at the marshes where the player must have Quina Quen in the party. The player must catch as many frogs as possible powering up Quina's Blu Mag spell Frog Drop, and can yield many rewards. When the player catches 99 frogs, Quale will battle the party and the reward for winning the battle is Quina's ultimate weapon, the Gastro Fork.

Quina can eat Axolotl or Sahagin to learn Aqua Breath, Gigan Toad to learn Frog Drop, and Anemone to learn Bad Breath. Adamantoises also appear on the overworld around the Lanar Island marsh, from whom Quina learns Earth Shake the earliest.

After the party returns from Terra, they can start a quest to restore Mognet Central by talking to Kupo in Alexandria. As part of this chain of correspondence Kumool from Ipsen's Castle sends a letter to Mois, who has relocated to the entrance of Fossil Roo at the Mist Continent marsh, since his abode at the Ice Cavern became inhabitable.

The letter the party delivers from Kumool to Mois:

Mois in response sends a letter to Noggy at Daguerreo.

"Qu's Marsh" (族の沼, Ku Zoku no Numa?) plays on the marshes when the player visits them, as well as during Mogster and Moggy's Active Time Events. It is similar to "Quina's Theme," but slower. 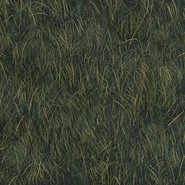 A battle background in a Qu's Marsh.

One of the many Qu's Marshes on the world map. 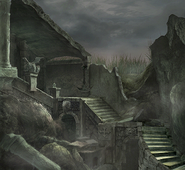