Various
Qiqirn are race of diminutive Beastmen that maintain peaceful relationships with the Enlightened Races of Vana'diel in Final Fantasy XI. Most reside in Nashmau, a former military outpost central to the western half of the Empire of Aht Urhgan. They have an easygoing and cheerful personality, but struggle speaking the common language due to their unusual vocal chords.

It is not uncommon to hire a Qiqirn as a shop or guild assistant, thanks to their reliability and quick wits. Some Qiqirn have even made use of their sharp sense of smell to become wealthy in the production of fragrances. According to their oral tradition, the ancestors of the Qiqirn lived a nomadic life in the northern lands. Even today, remnants of the Qiqirn's ancient lifestyle may be seen in their unique customs, such as their sheep-led wagon homes, their leather clothing, and their habit of carrying their valuables with them at all times.

Hostile Qiqirn exhibit a number of behaviors depending on their job. Qiqirn rangers will fight for a short period of time before running away to seek the assistance of their peers, who subsequently join the battle. Qiqirn thieves will flee outright, covering their trail with bombs which explode on contact.

These hazards can be destroyed with magic or a ranged attack. Qiqirn black mages from the Ruins of Alzadaal will run around casting high level black magic until, after a time, they use Warp to depart. 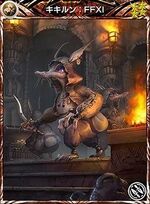 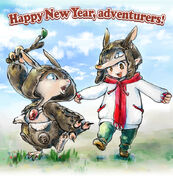 [view · edit · purge]In Inuit mythology, Qiqirn is a large, bald dog spirit that terrifies the Inuit people. It is a frightening beast, but also skittish and foolish. Men and dogs run from it, and it runs from men and dogs. It has hair on its feet, ear, mouth and the tip of its tail. When people approach it, they suffer fits. One way to scare it away is to shout its name.