A member of the Militesi nobility and a brigadier general in the imperial army, Qator Bashtar serves as Marshal Aulstyne's right-hand man--but not, perhaps, without some reservations. Nevertheless, General Bashtar is the finest MA pilot in the empire, and he often assists in the development of new models by testing them out himself. In spite of his rank, he also accompanies his men out on the front lines, often turning the tide with his own two hands. His military prowess has earned him several epithets, such as 'White Thunder,' 'the White Reaper,' and 'the Unscathed.'

Qator Bashtar is a supporting character from Final Fantasy Type-0, who also appears in Final Fantasy Agito and Final Fantasy Awakening. He is the most talented magitek armor pilot of the Militesi Empire, and a general and the right-hand man to imperial marshal Cid Aulstyne.

Qator is the brigadier general of the Militesi army. He is a proud, blond-haired, blue-eyed soldier who wears a patch over his left eye and the white-black-and-red uniform of a Militesi general. He often fights in the front line, wielding a sword in one hand and a pistol in the other. Qator is an expert magitek armor pilot with a custom-made MA. According to the Rubicus, Qator is 28 years old and 6'3" tall.

Qator is fiercely loyal to the empire and its head of state, Cid Aulstyne. Though hailing from an impoverished background, Bashtar was able to rise in the military ranks thanks to Cid's backing who values merit over background, gaining Bashtar's lifelong support in return. Even though Bashtar at times is skeptical of the marshal's schemes, he follow through with his orders without hesitation.

Calculating and calm even in the face of chaos, Bashtar always thinks of the best way to attain his objective, but upon deeming the objective impossible to attain, will order a retreat. Though known for his ruthlessness, Bashtar at times shows kindness and mercy to those he wouldn't need to, perhaps empathizing with their status as commoners caught in the war as juxtaposed with his own background.

The novel depicts the events of the previous cycle of Orience, before the final cycle depicted in the game. Qator is an imperial magitek pilot who lost to Class Zero in McTighe and the Dominion of Rubrum reclaimed the town. During a ceasefire he had met some Class Zero cadets in Ingram and explained the Militesi side of the war: the imperial snow-covered terrain is unsuitable for food production, but the other nations refuse to help the starving imperial citizens, and thus the acquirement of new land is their only chance of survival.

When Qun'mi Tru'e dies in the suicide mission to deploy an Ultima Bomb upon the Lorican Alliance, Qator inherits her l'Cie powers and is publicized as the nation's new Secundus l'Cie. His power is to empower machines, and thus he can control various MA outfitted with Ultima Bombs to simultaneously attack the capitals of Concordia and Rubrum; Mahamayuri is obliterated, but Akademeia survives with both Vermilion Bird l'Cie sublimated. During the Battle of the Big Bridge Qator's enhanced Gabriel MA defeats some Class Zero cadets who are captured and brought to Cid Aulstyne who wants to know if it is true the cadets can be revived if killed.

Qator leads the Militesi army to invade Akademeia, but word arrives that a new Vermilion Bird l'Cie is going to summon a Verboten Eidolon upon them. Not wanting to lose the chance to approach the Rubrumite capital, Qator urges his troops to press onwards to make it to McTighe before the summoning ritual can be completed, confident Rubrum will not forsake their own citizens. When they reach the town they find it evacuated, and Qator's withdrawal order comes too late: his army soon wiped out by the Knights of the Round. Qator makes his way back to Ingram to report to Cid, but the empire's Primus l'Cie Nimbus perishes in the battle. Qator stands as Cid's final line of defense as Rubrum marches upon Ingram and Class Zero storms the governmental building they are using as their final stronghold. Qator fights the class but even his l'Cie powers do not save him. He abandons his malfunctioning MA, but as Machina Kunagiri prepares to kill him, Rem Tokimiya stops him, saying they have already achieved their goal.

Bashtar is the empire's premier magitek pilot. He was discovered by Marshal Cid Aulstyne, and quickly promoted to general. He had a sister who died young.

In 842 the empire devised a three-part campaign to invade the Dominion of Rubrum. The first phase was Operation Solar Eclipse in which Brigadier General Qator Bashtar would lead a blitzkrieg attack on the Vermilion Peristylium from the ocean. Accompanied by the provisional First Airmobile Force and a l'Cie-piloted magitek armor, the general's objective was to force Akademeia to surrender. While the empire succeeds in conquering most of the dominion, Akademeia, and thus the Vermilion Bird Crystal, are protected by Class Zero who destroy the empire's crystal jammer, allowing for the dominion legionaries and Agito Cadets to regain their ability to cast magic.

Bashtar and his troops had infiltrated the academy building when learning the imperial flagship has been destroyed. Bashtar orders his men to find the survivor from the crash, who is brought before him to report their division had been defeated with magic. Bashtar admonishes the trooper for having fled leaving his comrades to die, and has him executed on the spot. He is dissatisfied of the news Rubrum's troops are using magic, since Qun'mi Tru'e's crystal jammer was supposed to block it. News arrive of more casualties and that connection to Qun'mi has been lost and that the Vermilion Bird Crystal has regained its full power. Upon learning a Vermilion Bird l'Cie has been sighted, Bashtar orders all troops to retreat, disappointed as they came so close to reaching their objective.

Bashtar returns to the Militesi capital of Ingram. The empire destroys the Lorican Alliance with an Ultima Bomb, and when meeting with Cid Aulstyne Bashtar comments that future generations will refer to this day as the start of Tempus Finis. Cid disagrees, saying the day marks the first ray of hope, one that the empire brought forth.

The dominion begins its long campaign to reclaim the conquered areas. During Rubrum and Concordia's joint attack on Togoreth Stronghold, Qator slaughters many of the opposing soldiers with his new flying magitek armor Gabriel before confronting Class Zero. The MA is still a prototype and overheats easily, and Bashtar is forced to fall back after fighting the cadets.

When Class Zero infiltrates the imperial magitek factory and faces off against the White Tiger Primus l'Cie Nimbus, a ceasefire is called as the Fabula Pact has been invoked halting all military operations between the empire, Concordia and Rubrum. Qator delivers the news to Nimbus and the cadets, saying that anyone who violates the pact is to be executed. The cadets give up the battle, but are puzzled a ceasefire with such terms was called at a time Rubrum had deployed them for a sabotage mission to imperial territory. During the peace talks Queen Andoria of Concordia is assassinated and the blame is placed on Class Zero. As the class orderly, Aria Luricara, rushes to deliver the news to the cadets, a sniper shoots her and the cadets abscond back to Rubrum leaving her behind. General Bashtar finds she is still alive, and orders Aria taken to a hospital much to his soldiers' surprise.[note 1]

A king takes over the Concordian throne and allies with the empire. The Militesi-Concordian coalition advances on Rubrum from both sides forcing the dominion to split its forces. As the Militesi army drives the Rubrumite forces back, Qator receives news the Concordian side is failing to advance, and is disappointed at their inferiority compared to the Militesi army. He notes that the 108th battalion deployed to the battle has many imperial officers that the marshal picked himself, and deems it a hindrance to his goal of being promoted.

When the Vermilion Bird Secundus l'Cie Lady Caetuna summons Alexander to defeat Milites, the new White Tiger l'Cie who accompanies Qator erects a forcefield around himself and Qator's Gabriel. Qator and the l'Cie are the only survivors, and retreat.

When the dominion infiltrates the Militesi capital Qator tells Aria to return to the dominion. She refuses, having nominated herself Qator's "minion", grateful for the care he had given her. When Class Zero arrives, Bashtar engages them head on in his improved Gabriel before learning that a malfunctioning prototype Ultima Bomb was secretly installed into his MA. Refusing to allow the city be destroyed, Qator takes the bomb into the atmosphere and jettisons it. Gabriel was damaged from the fight with the cadets, and fails to escape the explosion.

Qator pilots a magitek armor, called Gabriel, capable of flying with a jet fighter mode. He is fought twice in Chapter 2 and again at the end of Chapter 7.

Qator can take down opponents in both close and long range. He primarily attacks with his handgun but also summons firearms in a long range battle while he carries his katana. His strongest skill is to summon Gabriel to attack all of his opponents by bombarding them in a rapid fire. Qator is at a disadvantage when all of the players' allies are defeated in his side, allowing the opponent to attack him directly.

Qator is voiced by Hideo Ishikawa in the Japanese version. He shares his Japanese voice actor with Cait Sith from Compilation of Final Fantasy VII, Auron from Final Fantasy X, and Squall Leonhart from the Kingdom Hearts and Dissidia series.

He is voiced by Mark C. Hanson in the English version. 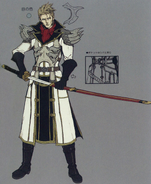 Qator and his Magitek, Gabriel.

Qator in his Magitek, Gabriel.

Qator in the Type-0 manga.