I want to get back my memories. I vaguely recall something red... and something sad. The red of the sun as it sets on the horizon. What happened to me in my previous life? How did I end up becoming a fiend?

That's right! I was a gorgeous rose, growing in the garden of a mansion along the Mi'ihen Highroad. A kind old couple lived there, and between them and their maid, I was well taken care of.

But one day, all that was stolen from me. Someone killed that lovely couple and set everything ablaze. No one else might remember that grand mansion, but I do. The red of the sun... The red of the fire... And that faint smell of perfume...

That's right. Before the couple was killed, I remember smelling that same perfume. Someone was arguing with the couple. I remember now, the couple had enormous assets, and someone was after their inheritance money... Was it... a young woman...? Gah! Why can't I remember!?

One notable Purpurea was created from the spirit of a flower cared for by an elderly couple who were murdered by a servant girl for gil. She had become an old woman, and when the Purpurea sees she has suffered enough, it renounces its revenge. It passes on to the Farplane, reuniting with its caretakers.

"A plant fiend that can move just like any other creature. Its rapid-fire Seed Burst hinders the advance of would-be attackers."

Seed Burst
Nothing to learn

"A plant fiend that can move just like any other creature. Oversouled, it's now able to cause MP damage with MP Crush, so watch out!"

Purpurea is of no threat and can be dealt with a simple Fire spell. 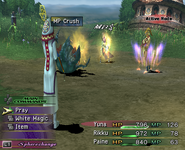 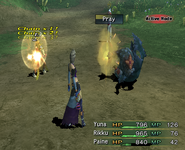