A katana used by Lasswell that gives off a beautiful blue shine. The blade is very straight and has an ethereal feel to it, which reacts to the wielder's emotions to let out a cold, yet beautiful shimmer. Under the tender care of Lasswell, this katana, which was originally used by Rain's father, Raegan, has weathered many years without dulling. (...)

Purple Lightning (紫電, Shiden?) is Lasswell's signature sword in Final Fantasy Brave Exvius. A weapon that only reveals its true power to those with absolute resolve, it once belonged to Sir Raegen.

It is featured in the game's logo alongside Rain's sword, the Crimson Saber, and together they frequently appear in the game's interface, including the dungeon and area "cleared" messages, and the battle icon for Limit Bursts.

A prototype of Purple Lightning was forged in Visectrum over 700 years ago by Ignacio in response to a challenge from Wayhem, who sought to prove that his robots would make blacksmiths obsolete. Having never successfully crafted a katana, Ignacio reforged the blade time and again from ore he personally mined and commissioned the traveling swordswoman, Suzume, to test the weapon. Though the katana ultimately broke in battle against Wayhem's PNK-2, Suzume compared using it to wielding lightning in the form of a blade. Taking the broken weapon as payment, she urged Ignacio to continue honing his skill so that he could one day forge a legendary katana.

Years later, as Veritas of the Flame, Ignacio forged Purple Lightning specifically for his comrade, Raegen (as Veritas of the Dark), who used it prior to the war between Aldore and Hess. In the final battle, he dueled his adoptive brother and sage of Hess, Rowen, who bet the sword's ownership on the outcome. Evenly matched, Rowen lost on purpose and let himself be sealed inside a crystal to end the fighting once and for all. Raegen promised to give the blade to him when the war was over. However, the battlefield's banishment to Lapis and the ensuing chaos prevented Raegen from freeing Rowen from his crystal for several centuries.

Purple Lightning remained in Raegen's possession even after his defection from the Sworn Eight of Paladia. In conjunction with Raegen’s technique, the blade was a force to be reckoned with. He used the Purple Lightning to fight the esper Odin, who would not forget the sound of their blades ringing against each other. When Rowen passed away, Raegen promised to give the sword to Lasswell (whom he was to adopt) when he would be old enough.

One day Raegen approached Lasswell, and asked why he was pushing himself so hard in his sword training. Lasswell was frustrated by being outperformed by ]Raegen's biological son, Rain, and wanted to be stronger than Rain, Raegen himself and everyone else. Seeing his determination, Raegen bequeathed the Purple Lightning to Lasswell, telling him that it would only reveal its true power to someone who "seeks strength no matter how circumstances conspire against him." Raegen told Lasswell to become strong and not to lose to Rain.

Although Raegen disappeared not long after that, Lasswell keeps the Purple Lightning, and it becomes his personal weapon as a knight. He keeps it on his back most of the time, ready for battle. He is not able to draw forth Purple Lightning's true power until his and Rain's opposition to the Veritas lead their party to the Fire Shrine in Zoldaad.

Lasswell, who is wounded after protecting Rain from a monster, does not realize his wound is worse than it appeared and almost passes out. The Purple Lightning glows as if telling Lasswell not to die. Along with the rest of the party, he confronts Veritas of the Flame, and Purple Lightning awakens due to Lasswell's determination. He and his comrades defeat Flamelord, but Lasswell collapses from blood loss. He is saved when the Veritas of the Dark heals him, thinking it would be a shame for Lasswell to die before battling him.

When visiting the Eroded Castle, Purple Lightning responds to Odin's presence. When Lasswell and his comrades defeat him, Odin observes that Lasswell's skill with the swords pales to that of Raegen's, but that he shows potential, and grants him his power.

Inside Fina's Psyche, when Lasswell and the others meet a memory version of the Sworn Eight of Paladia, Flamelord observes that Lasswell's sword is similar to that of Darklord. He says the sword is good, as is Lasswell's skill, and that he may possibly stand face-to-face with Darklord one day.

The blade is not mentioned in specific later on, and remains on Lasswell's ownership. Following Rain's disappearance in the battle against Sol, Lasswell adds the Crimson Saber left behind along Purple Lightning, although Lasswell prefers the latter despite being able to dual wield in gameplay as Pyro Glacial Lasswell, using it for the majority of season two.

Purple Lightning is obtainable at the Dimensional Vortex, as one of the rewards for completing the Trial of the Tranquil Will for the first time. It is a non-elemental katana with an Attack power of 92. Though it can be equipped by any character who can use katanas, when equipped by Lasswell or his Season Two variant (Pyro Glacial Lasswell), it also grants the passive ability Azure Soul, which increases the wielder's ATK by 40%.

The True Purple Lightning is obtainable as Hess King Lasswell's Super Master Trust Reward. It is a two-handed Katana with an ATK of 180, a Damage Range of 105% - 155%, a 50% accuracy boost and the Hess King's Ambition ability which resotes 7% MP per turn and increases the damage modifier of Lasswell's Mirror of Equity techniques by x0.5.

Purple Lightning also appears in King's Knight -Wrath of the Dark Dragon- as part of the the collaboration Here Comes Brave!.

Due to Purple Lightning being Lasswell's weapon, it makes an appearance along with Lasswell, as part of the collaboration with Brave Frontier in the Japanese version. In the Global version, however, Lasswell is seen wielding a sword that belongs to Arius, a character from Brave Frontier.

Purple Lightning, along with Crimson Saber and Reincarnation, appeared as an obtainable weapon during the crossover Vision of New Beginnings. The weapon is classified as a 5★ blade-and-sheath and was obtained by completing a "box draw" with event tokens.

Lasswell can be seen holding the weapon in his 2D artwork. As a unit in a 3D game, he will hold the blade-and-sheath the player has equipped on him. 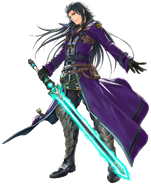 In the game's logo.

In the Limit Burst icon. 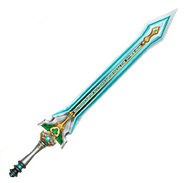 In King's Knight -Wrath of the Dark Dragon-.

Its name is derived from the yojijukugo term (紫電一閃, Shiden Issen?), translated as "Violet Lightning Single Flash" or a "Flash of Lightning". The term refers to a swing of the sword with such velocity and power that it is if it was lightning itself striking onto the earth, while the use of purple alliterates the term akin to lightning at night, and catching its bystanders off guard.