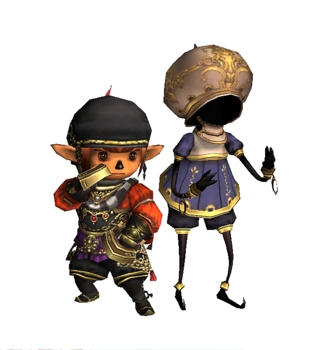 These wandering performers entertain crowds and confound their enemies with a customizable puppet known as an "automaton." Puppetmasters can also fall back on hand-to-hand fighting skills that utilize the flexible movements of their art.

Puppetmasters (からくり士, Karakurishi?) are an advanced job in Final Fantasy XI since the addition of Treasures of Aht Urhgan expansion. Entertainers from the Near East in Vana'diel, they use their puppets to entertain audiences, but they are also effective in combat. Puppetmasters are adept with hand-to-hand combat, but their specialty is activating an automaton to assist them in combat. The puppet can be equipped with different heads or chassis, as well as customized using over a dozen attachments.

Puppetmasters are accompanied by an Automaton which according to the story are a recent invention of a prominent engineer from the Eastern Empire, a Galka named Ghatsad. Traditionally, the entertainers of the past had used marionettes to entertain crowds. These new creations are built and maintained by their puppetmaster owners and function without the use of any strings or other attachment. Instead, a puppetmaster uses a remote device known as an animator which can be use to control the pet.

Square-Enix originally intended to introduce a Necromancer job class, but after deciding that it did not fit into the story concept of the game, they created the Puppetmaster instead.

To obtain Puppetmaster, players must speak to Shamarhaan, an Elvaan in Bastok Markets next to the fountain. He will tell the Adventurer to talk to one of his students, Iruki-Waraki, who is located in Aht Urhgan.

Travel to Aht Urhgan Whitegate and find Iruki-Waraki at K-9. He tells the adventurer to bring him an Automaton. From there, go to the Automaton Shop in the same zone at I-7. Ghastad will then tell the adventurer about the old relic Automatons and where to find them. After talking with him, players learn that the relics are located in Arrapago Reef. Make your way to the Northern Port and ride the boat to Nashmau. Alternatively, one can also take the Runic Portal to Azouph Isle. Run through Caedarva Mire to I-6 and arrive in Arrapago Reef.

Once in Arrapago Reef, go to H-10. Aboard the first ship, there should be a Skeleton, a Lamia, and a ???. When it's safe, touch the ??? to get the relic head and frame. Then, return them to Ghastad at the Automaton shop. Wait until the next day, and then talk to him again. Travel back to Iruki-Waraki and choose a name for the new Automaton. 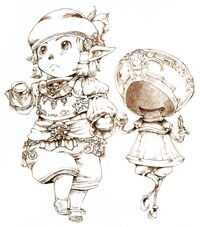 Warrior is one of the best choices for any Puppetmaster while in a party. It offers Provoke, allowing a Puppetmaster with a healing Automaton to be a back up tank. It also offers Attack Bonus, Double Attack, and Berserk for increased damage.

Monk is a good alternate to the Warrior. This gives the Puppetmaster higher Martial Arts traits earlier, Boost to raise their damage and help keep hate off their Automaton while solo, as well as Counter, Dodge, Focus, and Chakra.

With a Healing Automaton, a Puppetmaster is able to heal, but not as effectively as a White Mage. Despite this, they can free up Red Mages and Summoners to use their offensive abilities and provide back up healing if necessary. Aside from this, White Mage offers little for a Puppetmaster both inside and outside of parties.

Ninja are a very good subjob for a solo Puppetmaster. Utsusemi will tank damage, allowing the Automaton to take on a damage-dealing role. It is not advisable for parties, since it offers little that will be useful.

Dragoon is another good, yet over-looked support job choice. A Dragoon subjob offers Attack Bonus at earlier levels. Jump further increases damage. There are also many pieces of gear that add Haste and Attack+ that make this an acceptable support job for a solo or party Puppetmaster.

Dancer is a superb subjob for a solo player, or for playing as a support healer in parties. It gives healing abilities, debuffing abilities, and the option to have the Automaton on a DD frame to utilize their damage for faster kills.

Scholar is a very good sub job for a solo Puppetmaster. PUP/SCH only offers spells available to a level 45 Scholar, but at level 90 strength while under the effects of Light Arts or Dark Arts. It gives healing and offensive magic and most importantly access to Sleep. PUP/SCH can solo very well with well timed Automaton magic attacks alternated with Sleep.

Promotional artwork of the Puppetmaster by Yuzuki Ikeda.

A Mithra Puppetmaster in Artifact Armor.