The Puppetmaster (からくり士 or カラクリ士, Karakurishi?, lit. Automation Master), also known as the Gadgeteer or Tinker and abbreviated as PUP or GDT (か, Ka?), is a recurring job class in the Final Fantasy series.

While only formally classified as a job in Final Fantasy XI and the Tactics Advance series, they are thematically present in the stories and worlds of Final Fantasy IV and Final Fantasy VII. They command inanimate puppets and machines in battle.

The Puppetmaster (PUP) use Automatons to aid them in battle, and can customize them to fulfill a variety of roles and use a number of techniques. The Puppetmaster is also second only to the Monk in the art of hand-to-hand combat.

Gadgeteer (GDT) is a job available to moogles. Gadgeteers rely on the tricks held within Pandora's Box, learned by knuckles, for their special abilities. The Pandora action ability may affect all members of the player's team or the enemy team.

Tinker is a job accessible to moogles. The job uses gadgets that have a 50% chance of either hitting every enemy or every ally, making them an unreliable class. They can cast normally single-target spells on multiple units, albeit with restrictions.

Though the use of their clockwork ability, Tinkers can stop monsters...and allies...dead on their tracks.

Tinkers use their clockwork ability to stop enemies or allies in their tracks. Their attacks are physical and airborne like an Archer and a Dragoon.

Luca, the princess of the dwarven kingdom, appears with the Shop Hand (新米技師, Shinmai Gishi?, lit. Novice Engineer) job. While she functions as a damage dealing unit that uses hammers in gameplay, in the context of the game's story she is an engineer that works with her automatas, Calca and Brina. Similar to a Puppetmaster, many of her Band abilities have her working with Calca and Brina to deal massive amounts of damage to foes.

The Tinker appears as part of the Crystal Defenders collaboration. 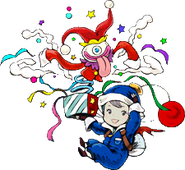 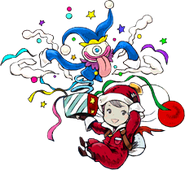 A moogle as a Gadgeteer in Final Fantasy Tactics Advance.

A tinker was originally an itinerant tinsmith, who mended household utensils. The word is attested from the 13th century as 'tyckner' or 'tinkler' a term used in medieval Scotland and England for a metal worker.