The Pulse fal'Cie. It held our future - and our fate.

The Pulse Vestige, identified as The Pulse fal'Cie, Lowerworld Vestige in the location name popup, is a location in Cocoon in Final Fantasy XIII. It is a large towering structure originating from Gran Pulse with a maze inside. It was located in Bodhum before being moved to the Hanging Edge by PSICOM. The Pulse fal'Cie Anima resides inside it.

Due to its story importance, the Pulse Vestige is featured in all flashback scenes set in Bodhum.

The Pulse Vestige is an unrevisitable location and comprises the second chapter. Since the Crystarium system is yet to be unlocked, enemies in the Pulse Vestige give no CP. It is the best location to farm for Shrouds (12% drop chance, increases to 96% with 0 star battles).

The fal'Cie sculpted Cocoon in antiquity, using resources harvested from the world below. When Cocoon's shell was fractured in the war, they repaired it with raw materials again gathered from Pulse - buildings chief among them. Remnants of these structures, termed Vestiges, can still be found throughout Cocoon today. The centuries-old Vestige outside of Bodhum was believed to be nothing more than a harmless curiosity. The discovery of a Pulse fal'Cie inside its walls proved this false, however, leading to the detainment and subsequent Purging of countless citizens whose only crime was being in the wrong place at the wrong time.

The Pulse Vestige was a landmark in Bodhum and did not have an entrance until thirteen days before the Purge. It was taken to Cocoon in secret by Barthandelus in the aftermath of the War of Transgression. The entrance formed when Fang and Vanille, who were inside the ruins, awoke from crystal stasis. Serah Farron accidentally found the entrance and was turned into a l'Cie by the fal'Cie Anima when she ventured inside out of curiosity. Nine days later, Anima took Serah captive into the ruins.

After the Sanctum discovered the opening into the Vestige, they sent in a PSICOM search party, who were turned into l'Cie and transformed into Cie'th. As the existence of a Pulse fal'Cie inside the ruins became known, PSICOM decided to destroy it, and so it is taken to the Hanging Edge by Palamecia. Lightning and Snow Villiers venture inside the ruins to rescue Serah, accompanied by Sazh Katzroy, Hope Estheim, and Vanille.

Inside, they discover a horde of Cie'th and recover Serah, who turns into a crystal after asking Lightning to save Cocoon. Snow refuses to believe she is dead, clinging to the legend of crystallization equaling eternal life, but Lightning is not as optimistic. The team makes their way further into the Vestige to confront Anima.

Snow pleads for Anima to turn Serah back offering to become a l'Cie in her stead, but Lightning and Sazh attack the fal'Cie. They defeat it, but Anima transports the party to the domain of the gods where Pulse brands the party as l'Cie and they share a vision of Ragnarok being summoned in Eden. PSICOM destroys the Pulse Vestige with lasers, slaying Anima and sending it and the remains of the Pulse Vestige along with Lightning and the group tumbling down towards Lake Bresha, which is crystallized upon impact.

"The Vestige" plays within the Pulse Vestige. "Taejin's Tower" is also played.

The backing chorus is actually a recording of my daughter Aya's voice. I had her sing for a demo, but I ended up using it. Since I was told that FF13 has various dark scenes especially in the beginning of the game, I wanted to create a mood of light tension here. By writing using conventional minor sounds, it would sound tacky and too heavy, so I deliberately tried to use chords which could sound neither major nor minor.

Masashi Hamauzu on "The Vestige."

"The Vestige" also plays within the dummied Seventh Ark location if hacked into.

The Pulse Vestige is the setting for the Survival Event The Pulse Fal'Cie which allows the player to recruit Vanille to their party and it was later briefly revisited in the Challenge Event Lightning Strikes.

As seen in Vanille's flashback of the first day, she and Fang awoke from crystal stasis inside the Oblatorium area.

An identical structure to the Pulse Vestige is seen in Final Fantasy XIII-2, located atop the highest point in Academia in 400 AF, as Proto fal'Cie Adam's base of operations.

Glimmering crystal dust, similar to the phenomenon witnessed in Eden in Chapter 12, appears within Pulse Vestige. 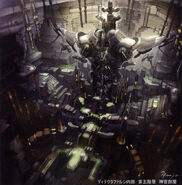 The Pulse Vestige in Oerba artwork.

Protera, Guardian of the Vestige artwork.

Gate to the Vestige artwork.

The Vestige seen in the Hanging Edge.

The Vestige being transported by the Palamecia airship.

Inside the Pulse Vestige.

Vanille in the Pulse Vestige.

The Vestige submerged in the crystallized Lake Bresha.

Guardian of the Pulse Vestige, Protera.

Snow looks up to the Vestige in Bodhum.
Final Fantasy XIII setting
Deutsch
Community content is available under CC-BY-SA unless otherwise noted.
Advertisement