Cid Pollendina: Oh, shut up and help me remodel the Pub page!
Please expand this article into a full one. The following tasks need to be completed:This request can be discussed on the associated discussion page. Remove this notice upon completion.

Greetings! How may I help you?

The Pub (パブ, Pabu?), also known as Tavern and Cafe, is a recurring establishment in the Final Fantasy series.

In the main series, the pub is a place to gather information on current events in the game, but otherwise exists mainly to provide flavor to the town or city in which it is found. In the Ivalice games, however, the pub becomes more important, acting as a place for players to select certain missions that can serve to either advance the storyline or gain new items and allies. Certain games enable players to either dispatch characters to end mission automatically, or control them in mission battles.

Another of the more recurring feature is where "Rumors" are circulated that add to learning more about the world. "Rumors" also add more story element that could not be presented with cutscenes.

This section about a location in Final Fantasy II is empty or needs to be expanded. You can help the Final Fantasy Wiki by expanding it.

This section about a location in Final Fantasy III is empty or needs to be expanded. You can help the Final Fantasy Wiki by expanding it.

Pubs appear in almost every town.

Pubs appear in South Figaro, Kohlingen, Albrook, and Vector. The South Figaro pub is where the party first encounters Shadow, and is a minor part of a subquest during the first part of the game, where Locke must steal Cider from a merchant in the pub's basement to get access to a hidden passage that can get him out of town.

The Kohlingen pub is in the same building as the Inn, and is where Shadow be be recruited for 3,000 gil during the party's trip to Jidoor and Zozo. In the World of Ruin, Setzer is recruited here. Albrook's pub features Imperial troopers drinking and flirting with dancing girls at tables in front of a stage, and is noticeably larger than the other pubs.

If the player manages to enter in Vector's pub, there is a man who recognizes the party as Returners and will tell the party about the Magitek soldier project. If the party accepts in hearing more gossips, he will tell Kefka was the first experimental Magitek knight who lost his sanity because the process was not perfected at that time. This is the only biographic data the player can find about Kefka. For one reason or another, the player can use the Warp spell within the pub.

Zozo has a building marked as a pub, but as with all buildings in Zozo the sign is merely decoration and the interior is a two-floor structure with a bar and table on the ground floor. At the balcony outside the pub the player can find the Chainsaw, and in the World of Ruin can dissolve the rush on a rusted door to access Mt. Zozo.

In the SNES release, all Pub signs were changed to read "Cafe" due to censorship.

The main pub is the Seventh Heaven Bar, which serves as the headquarters for AVALANCHE. There are other pubs located throughout the world, such as the Wall Market.

There is a pub in Dollet. If the player enters it while escaping from X-ATM092, the party loses 20 points. The first floor sells beverages and confectionery, and the top floor is devoted to the game of Triple Triad. The pub manager's office is accessed via a bridge that cuts over the street outside. Only those invited are allowed to enter, but the player gets the invite if they win against the manager in a game of Triple Triad.

The party can find a Timber Maniacs magazine from the upstairs and Occult Fan II from the stacks of magazines in the manager's office alongside some random items. There is also a man dressed as a woman at the downstairs of the pub. The Siren card can be won from the pub manager and the Queen of Cards is found at the upstairs of the pub when she is in Dollet; it is required to get her to do Dollet to do the side quest with her.

There is also a pub in Timber called Aphorora. It is located near the Railroad Station and patrons can walk through the pub into a back alley to access the Timber TV Station. The drinks for sale are named after greens found in other Final Fantasy games. There is a Cure draw point outside and a Scan draw point in the back alley behind the pub.

There is a pub in Winhill that used to be managed by Raine. It is located next to the Winhill mansion. Years later the premises are run by a different woman, but some say Raine's spirit can still be felt within the pub, kept alive by her white flowers, and visiting the pub is needed to complete the vase side quest.

Pubs help expand the storyline. There is one in Dali where Steiner attempts to obtain information from Slai about the cargo ship parked in town.

Later on, when the group reaches Lindblum, Zidane Tribal declines the invitation to eat at the castle and instead decides to eat at a pub in the Industrial District, where he runs into Freya Crescent. At the beginning of disc 3 in the pub in Alexandria, Zidane struggles with his feelings for Princess Garnet as she prepares to become queen.

There is a bar in Luca where Tidus and Yuna seeking for Auron. Later in the game, Wakka obtains his Celestial Weapon, the World Champion from the owner of the bar.

The airship Celsius has a bar in the cabin section. Barkeep is the bartender of the Gullwings.

In A Realm Reborn, in addition to the taverns in the main city-states, the "Seventh Heaven" is a bar in Revenant's Toll, Mor Dhona. The players can accept many of high level sidequests from NPCs in the bar. Later in the Main Scenario quests, the Scions of the Seventh Dawn new headquarters are in the back of said bar.

Come on in, then! Make yourself welcome.

Taverns, also known as Bars, are special locations in every town or city in Ivalice. Like the Outfitters and Warriors' Guilds, it is a mere menu that cannot be explored. The bartender will give the player a series of options. It is here that the player can listen to Rumors, or run Errands after chapter 1.

The Rumors are based around the events of the game at the moment, and will change after storyline events pass. Errands can be played at any time. After the player returns from Eagrose Castle in chapter 1, the tavern keeper will tell them about multiplayer content (|War of the Lions only) such as Rendezvous and Melee.

The Pub is where players can listen to rumors, take up missions as well as quitting any missions currently undertaken. The player will also end up here if they go to Multiplayer Mode.

All five settlements in Ivalice has a pub, listed below along with its in-game description:

The Pub acts as a place for reading rumors and notices, obtaining quests, and checking current quest status. Additionally, a clan can undertake Clan Trials to append a title according to their clan's talents such as teamwork, aptitude, negotiation skills and adaptability.

All settlements have a pub serving the same purpose throughout the game. Noticeably, the owner retains a similar sprite to the pub owner in Final Fantasy Tactics Advance, and is referred to as "barman" instead of "pubmaster". Luso Clemens is the character taking the missions, with Adelle, Cid, and Hurdy accompanying him.

This section about a location in Final Fantasy Type-0 is empty or needs to be expanded. You can help the Final Fantasy Wiki by expanding it.

There are only two pubs; the first is located in Sky Town and the second in Southwest Town. The player must visit both to advance the story.

Cafes are the center for finding more information about the current world and its current events. They can be found in First Town, Desert Town, Giant's Town, Lynn's Village, Port Town, Guardian's Town, Venus' City, Race Circuit, and Final Town. A gramophone can be found in each cafe, and paying 1 GP allows the player to play any of the game's tracks and listen to it on a continuous loop until they leave town. The Cafe in Guardian's Town is actually a front for the hidden Guardian's Base, which can be accessed using the gramophone.

Cafes are the center for finding more information about the current world and its current events. They can be found in Dharm, Muu, New Dharm, and Darius.

The bar inside the Celsius cabin, Final Fantasy X-2.

The inside of the pub in Grimoire of the Rift. 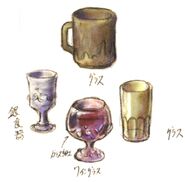 Concept artwork of the drinking cups from Final Fantasy IX.

Concept artwork of the a waitress's tray from Final Fantasy IX.

A pub, formally public house (a house "open to the public", as opposed to a private house), is a drinking establishment fundamental to the culture of Britain, Ireland, Australia, Canada, New England, Metro Detroit, South Africa and New Zealand.