The universe stretches into infinity! What life can survive its expanse? Dare you face the envoy of the stars?

PuPu (コヨコヨ, Koyokoyo?) is a small blue alien that first appeared in Final Fantasy VIII abducting various objects on the world map. It has since made minor appearances in a few other games.

For the side quest information see: UFO?.

After encountering PuPu's flying saucer around the world, the party destroys the craft, leaving PuPu to beg them for Elixirs to recover. If the player appeases the alien, they get its one-of-a-kind Triple Triad card. It is also possible to kill it or even devour it. Completing the PuPu sidequest in the Steam and Remastered versions earns the player the achievement UFO.

PuPu is one of Lulu's dolls, appearing, among others, as the Space Master weapon. For a weapon to have the model of PuPu, it requires at least one of the following auto-abilities: Double or Triple Overdrive, Double or Triple AP, or Gillionaire, or all four Strength or Magic enhancing bonuses (+3%, +5%, +10%, and +20%).

PuPu is a doll held by Rikku in the Mascot dressphere. It is also the icon for the game's saved data on the memory card screen.

In the International and HD Remaster versions, PuPus appear in the Fiend Tales endings. In the Iron Giant, a PuPu used a robotic replica of an Iron Giant to interact with Spirans before departing once fulfilling its mission. Another PuPu appears in the Concherer ending, able to speak the Spiran common tongue, and was trapped in the shell of a Concherer before using the salt water to melt it away so it can depart Spira.

PuPu's silhouette appears on several signs in Palumpolum and Eden. It is also visible on a drink can, implying PuPu is a mascot for a company. The can reads "GINGER" in Cocoon script.

PuPu is a downloadable content monster. They appear in numbers and bring their UFO into battle with them. When recruited into the Paradigm Pack, PuPu is a Medic. They are the only enemies able to drop Elixirs, albeit their drop chances are very low.

As with Final Fantasy XIII, black silhouettes of PuPu are still present, but only in Academia.

Odd creatures that appear after unidentified flying objects have been knocked down.

PuPu is a summon that it uses Accelerator, which halves the summoner's Bravery, but repeatedly increases it by 60 during a certain period of time. PuPu can be obtained as a stage bonus from the Destiny Odyssey VIII storyline. The effect of Accelerator is duplicated with Chaos's Chaotic Deluge summon, which halves Chaos's Bravery but increases it by 99 over a long period of time.

The Museum mentions "PuPu" refers not just to a single creature, but an entire race, which may have earned their name from the sound made when they walk.

PuPu returns as a summonstone with the same function as in Dissidia. It can be purchased from the Cornelian Moogle Shop for 50 KP. It is unlocked at the shop as a limited offer after earning 710 KP total.

An alien from another planet whose frail appearance inspires protective feelings. It needs Elixirs to repair its broken UFO, and many people, fooled by it's gentle looks, provide them, not realizing it's master plan...

Pupu appears as an enemy in Battle Music Sequences.

A strange creature from outer space.

PuPu appears as guest characters, ability cards, Spirits, enemies and enemy bosses during the special event PuPu Attacks!. The aliens arrive on Palamecia, declaring their intent to conquer the planet. After multiple battles, during which Wol defeats both the PuPu and their UFOs, they give up on their invasion plans. Promising Wol that they won't cause more trouble, they offer to show their friendship by having some of them remain behind to accompany him as Spirits.

As Spirits from the Spirit Grove, Wol can either have a floating PuPu or a giant PuPu clinging onto a UFO by his side.

The PuPu ability cards correspond to the fire, water, wind and earth elements. Mysterious Antenna is required to augment any PuPu cards and may be obtained from defeating a UFO enemy. 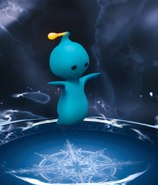 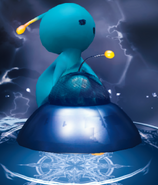 PuPu on a UFO.

PuPu from Final Fantasy VIII has appeared in a Coca-Cola bottle cap figure.

In Kingdom Hearts II, the PuPu blueprint can be obtained by receiving an S-Rank in the Stardust Sweep (Mission 2). It costs 1159 munny and requires 102x Material-G, 3x Fire-G, Comet-G, 2x Thunder-G blocks.