Whatever that is, it’s disgusting.

Psychomancer is an enemy in Final Fantasy XV fought in the Steyliff Grove Menace and in the final floor of Balouve Mines Menace. They are tall floating daemons surrounded by blue flames. The tougher variant can also spawn in Insomnia where it will drop Ulric's Kukris, the daggers once belonging to Nyx Ulric, the protagonist of Kingsglaive: Final Fantasy XV.

Relative of the necromancer sowing ill in Steyliff Grove. This daemon performs all the same petrifying and death-defying tricks as its kin—only it does them better.

A harrowing presence lurking amid the depths of the Balouve Mines and Steyliff Grove. Possessed of powers that exceed even those of other psychomancers, this greatest of skeletal sorcerers is not a daemon exorcised easily.

How to find in Insomnia[]

Map for the Royal and Windows Edition 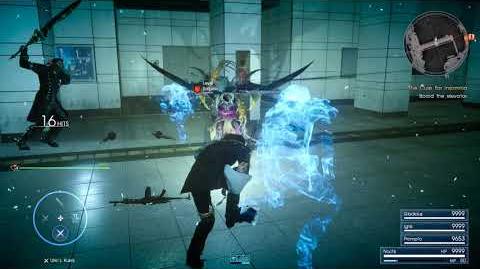 In the Royal and Windows Editions the psychomancer still spawns back in front of eastern station on the main thoroughfare at the beginning of the Insomnia Ruins. There are three black flan before the the Ifrit boss fight the player must defeat. After entering the Citadel and defeating the Fierce, the player can approach the elevator in the next hallway and the main quest objective changes to "board the elevator." Rather than doing that, however, the player should exit the Citadel and defeat the Red Giants outside, then continue along the main road, head through the narrower path to northeast past a yellow car, and head south and defeat the arachne there.

There is a subway entrance nearby that leads underground. The path is gated but the panel next to the gate opens it. Taking the western turn finds troopers and salpinx the player should kill, then backtrack back to the street level near where the player defeated the arachne. Continuing east finds a yojimbo the player should kill. Continuing along, the path turns north and there are two nagarani to defeat. Continuing from there leads to the main road where the psychomancer will spawn. There is a red vending machine in the middle of the area south of where the psychomancer spawned (an F-shaped area on the map between the buildings near the fire deposit). Interacting with the vending machine respawns the psychomancer.

In the original version psychomancer simply dropped Ulric's Kukris that the player could pick up from the ground after the battle. After patch 1.21, some players have also reported on finding Ulric's Kukris simply lying on the street, thus getting a second pair. In the Windows and Royal Editions, some players report that the psychomancer will not drop the daggers unless the player is in Chapter 14 via Chapter Select, which resets all quest progress and thus effectively works as a New Game Plus. However, other players have been able to obtain them without using Chapter Select, and still others have again found the kukris simply lying on the ground without the psychomancer spawning, as recently as Royal Edition version 1.24 with an end-game save rather than Chapter Select.[1]

Psychomancers use both magical and physical attacks. They are capable of causing Instant Death by grabbing Noctis, though the player can try break free with the button-mashing prompt. Their triangle beam attack can turn the party members to Stone. They shoot out flaming energy balls that explode. Psychomancers summon skeletons, which also die when the psychomancer is defeated. They are weak to greatswords, shields and ice.

The player can play defensively and parry their attacks. Psychomancers are fairly slow, and the player can get behind them to deal blindside-strikes and blindside links. When character-swapping to Prompto, his lumen grenade makes psychomancers weak so the other party members can quickly kill them.

To avoid turning to stone from psychomancer's triangle beam, the player can wear accessories that prevent it or eat foods that provide Resilient. When fighting the psychomancer in Insomnia, the player can summon Umbra to return to the open world, as any food buffs obtained there carry over. However, Stone is also quickly healed with Gold Needles or simply wears off quickly, and waiting is not too much of a hindrance as petrified characters are invulnerable to damage.

Psychomancy is occult communication between souls or with spirits.

In traditional Japanese folklore beliefs souls that died in a sudden or violent manner, or ones that did not get the proper burial rituals performed upon them, may linger in the physical plane as yūrei, analogous to western legends of ghost. Yūrei are frequently depicted as being accompanied by a pair of floating flames or will o' the wisps that are separate parts of the ghost rather than independent spirits, similar to how flames surround the ghostly psychomancer and its ilk.