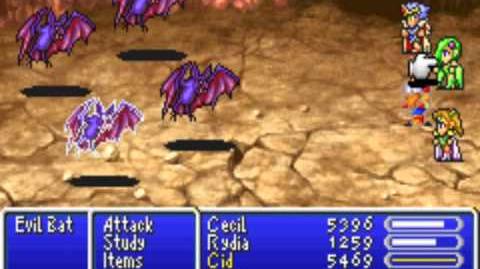 The psycho Edward bug is a bug from the Game Boy Advance port of Final Fantasy IV.

Normally, when Edward is low on HP, he automatically uses Hide to protect himself, but this makes it difficult for him to be healed, and renders him unable to attack. This, coupled with his mediocre stats and relatively weak equipment, makes many people see him as useless. However, there is a simple way in the GBA port to make him a force to be reckoned with.

If one casts Berserk on Edward, he will attack nonstop, as is usual for someone under the status. If he runs low on HP (Tornado works best), he automatically hides. However, after he automatically hides, on his next attack, he will appear again to attack. Despite being on the screen again and still attacking every turn, Edward is still counted as being in "Hide" status, making him invulnerable to all attacks.

There is only one drawback to this bug; if all the other party members have fallen in battle, he will "come out" of hiding. This means little chance of the player winning the battle, as Edward is still Berserked, and will have minimal HP.