The Psychic is a dressphere in the International and HD Remaster versions of Final Fantasy X-2. Psychic uses mental energy and the law of physics to engage in combat. The dressphere's icon is a lightning bolt.

Yuna wears a sailor-like outfit with unique patterns. Her top is blue with a white ribbon tie and white bottom lining. Her skirt is blue with red line patterns and a slit in the front. Her blue knee-high boots have magenta laces and she wears magenta thigh-high socks. She has a silver and pink visor with a blue rim.

Rikku wears a long-sleeved white top with a blue ribbon bow. She has a short blue skirt with yellow line patterns. Her boots are black and brown with blue laces. She has a silver and green visor with a pink rim.

Paine wears a version of a boy's uniform. She has a long-sleeved white top that reaches her thighs with silver patterns at the bottom and long plain white pants. She wears plain black shoes. She wears a silver and purple visor with a yellow rim.

Yuna's victory pose is to backflip, then pose in mid-air, and remove her visor. Rikku lazily turns onto her side in mid-air, while Paine crosses her legs in a sitting position and takes off her visor.

During the player's first trip on board Celsius, Shinra will mention that he has completed his latest invention. The player must speak to him and choose the Creature Creator option, which is highlighted in green. After the tutorial, the player must win the Standard Cup in the Fiend Arena to receive the dressphere as the reward.

The Psychic dressphere can be obtained once per save file. As the game keeps track of how many times the Fiend Arena Cups have been beaten even in a New Game Plus, it is not possible to get duplicates. The same was true for the Adamantite in the original versions, but in the International version, it can be obtained infinitely, making the Psychic dressphere the only truly unique item.

Mastering Psychic requires 760 Ability Points. Psychic abilities cannot be used outside of this dressphere. Psychic is the only dressphere that allows the user to specifically reposition themselves on the battle field. If the whole party equips Ribbons with this dressphere, they become immune to all attacks.

Psychic increases Magic by 1 point and Accuracy by 2 points per each level. Its regular attack range is one tile ahead of the character. Multiple copies can be found on the ground inside the tower or bought in shops.

The Psychic appears on an gold card.

The Psychic's image data is on the North American PS2 disc, despite the dressphere not being available in that version.

Rikku's victory pose is similar to that of Kefka in Dissidia Final Fantasy. 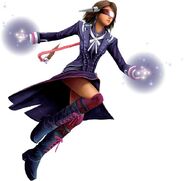 Yuna as a Psychic.

Rikku as a Psychic.

Paine as a Psychic.

Yuna as a Psychic in Final Fantasy X HD Remaster. 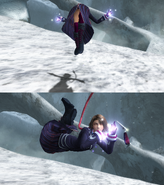 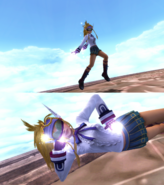 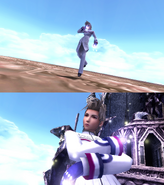 [view · edit · purge]A psychic is a person who has an ability to perceive information hidden from the normal senses through extrasensory perception (ESP); it can also denote an ability of the mind to influence the world physically using psychokinetic powers.