The Oracle's canine companions Pryna and Umbra—female and male, respectively—serve as delivery dogs, relaying messages between Lunafreya and Noctis. Although they manifest themselves as a pair of white and black pups, they are in actuality Messengers boasting mystical powers of their own.

Divine Messenger who assumes the form of a white female dog. This celestial canine is fiercely devoted to her owner Lunafreya, following her every word. As a pup, she incurred an injury on her way to visit Noctis in the Crown City. As luck would have it, the young Prompto came to her rescue—and their chance encounter became the catalyst for the crown prince forging a friendship that would last a lifetime.

Lady Lunafreya's other dog, Umbra's little sister. She's white and fluffy and totes adorbs. Rescued—and it's thanks to her I'm here now.

Pryna is a white dog with blue eyes with subtle gray markings on her face. As a puppy during the events of Brotherhood Final Fantasy XV, she was more cream-colored. She has a green bandage around her right front paw. Pryna and Umbra both use the same basic dog model in Final Fantasy XV, but Pryna's bandage is on the other leg and she doesn't have the bushy gray hair above her eyes like Umbra does. Pryna doesn't have the strap across her back because she doesn't carry the Lovers' Notebook.

The dogs are characterized somewhat differently in Brotherhood than in the rest of the Final Fantasy XV Universe. In the former, they appear more like real animals, whereas in the Omen and in Final Fantasy XV their appearances are frequently accompanied by mystical phenomena.[note 1]

Whereas Umbra is associated with a corporeal presence, delivering physical messages between Noctis and Lunafreya and literally transporting the player to return to past areas of the game, Pryna is associated with dreams and visions. Throughout her appearances in Omen (although the dog is eventually revealed to be a seemingly demonic creature who only appeared to Noctis as Pryna) and the DLC episodes, she delivers psychic messages and even visions of the future. In this sense, Pryna and Umbra could be likened to yin and yang from Chinese philosophy, where yin is the negative/passive/female principle associated with the moon, shaded orientation, and hidden and sinister and overcast things. Yin is represented by the color black, but the light/dark dualism is inverted in Final Fantasy XV, also seen with the colors of the Crystal, Lucis, Tenebrae and the Niflheim Empire. The yin and yang symbolism extends to Lunafreya and Noctis, Pryna being more associated with the former, whereas Umbra is most often seen interacting with Noctis.

In Brotherhood Final Fantasy XV Lunafreya sends Pryna to see Noctis, but she injures her leg. She is discovered by Prompto Argentum, who nicknames her "Tiny" and covers her wound with a bandage that has his name on it. Pryna leaves Prompto one night and returns to Lunafreya, who is overjoyed to see her. She learns about Prompto by inspecting the bandage on Pryna's leg and writes the boy a letter to thank him for taking care of her puppy.

Years later, Pryna and Umbra greet Lunafreya after she escapes Insomnia. Later, Prompto notes that only Umbra is making deliveries to them, wondering where Pryna is. Gladiolus Amicitia speculates Pryna is traveling with her owner, and Prompto is wistful as he misses the dog. Pryna is with Lunafreya when Ravus Nox Fleuret visits her in Altissia.

Lunafreya dies during Leviathan's Revelation. When Noctis's friend Ignis Scientia reaches the Altar of the Tidemother where her body is, he runs into Pryna who topples to the ground. Recognizing it as Lunafreya's dog, Ignis approaches her, and witnesses a vision of the future where Noctis fulfills the prophecy of the True King by sacrificing his own life.

When Noctis visits Tenebrae, Lunafreya's homeland, he learns Pryna died when Lunafreya did, possibly of heartbreak of having lost her owner. Umbra is said to be sad for having lost both his owner and his companion.

In Episode Prompto, Prompto recalls Pryna bringing him a letter from Lunafreya asking him to support Noctis and be his friend. When he wanders the snowfields alone, Pryna appears to him and leads him to a field of fallen magitek troopers where Prompto must symbolically comfort the child of himself that embodies his fears and insecurities. Whether this is the actual dog or a figment of Prompto's imagination is ambiguous.

Lunafreya is revived in Final Fantasy XV -The Dawn of the Future-. When only Umbra appears to her, she realizes that Pryna has died.

Concept artwork of young Noctis and Lunafreya with Pryna and Umbra for Final Fantasy XV.

Pryna and Umbra with young Noctis and Lunafreya.

Lunafreya greeted by Umbra and Pryna in Final Fantasy XV. 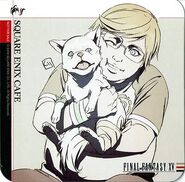 Artwork of Prompto and Pryna for the Brotherhood themed promotional coasters at Square Enix Cafe.

Pryna traveling with Lunafreya and Umbra in the Girls' Day 2018 key art.

Pryna is Welsh and means the verb "purchase". However, seeing how the names in Final Fantasy XV tend to derive from Latin, the true etymology may be pruina, Latin for rime and hoarfrost, befitting her white fur.

Umbra and Pryna may allude to Geri and Freki from Norse mythology, two wolves that accompany the god Odin that are sometimes depicted as being light and dark-colored.

Pryna's counterpart is Umbra, whose name means "shadow". Though Pryna's name doesn't mean "light", she could be seen as representing it for her white color.

When Lunafreya dies Pryna is said to have died alongside her, while Umbra stays in the mortal world. This could allude to light disappearing from the world and leaving only shadow, as without Lunafreya the Starscourge will overwhelm Eos. The dogs could also be seen as also embodying the yin and yang duality from Chinese philosophy, Pryna and her more otherworldly presence representing yin. When the sun rises, Umbra is the only dog seen greeting the breaking dawn.