Protects you from various attacks.

The Protect Ring (守りの指輪 or まもりの指輪, Mamori no Yubiwa?), also known as Protector Ring, Protection Ring, Ring of Resistance and Ring of Renewal, is a recurring piece of armor and accessory in the series. It can be classified either as a ring, or as an armlet. It usually defends against Instant Death or grants the user the Auto-Protect status.

Ring that guards against instant death.

The Protect Ring is an armlet that protects against Death-elemental attacks, has +8 Absorb, and -1% Evade. It can be bought for 16,000 gil at Gaia, and found in the Flying Fortress and the Chaos Shrine (past).

Unlike what the description states, Protect Rings do not resist all instant KO attacks, only ones that are Death-elemental (Death and Kill). Many instant KO spells and abilities, such as Earthquake and Break, require alternate resistance protection (Earth and Stone, respectively).

The Protection Ring boosts Defense by 18 and protects against the element Death. It drops from Lamia Queen, and is found in Raqia.

Though the Protection Ring prevents Instant Death from the spell Death, it does not protect against Instant Death inflicted by the Warp or Teleport spells, which are Matter-elemental.

The Protect Ring is an armlet that resists Fire, Thunder, Ice, Wind, and Light and boosts all stats by two. It can be equipped by all jobs. It can be found in the Temple of Time and Ancients' Maze, or dropped from King Behemoth (rare).

The Protect Ring resists all elements. It can be found in the Lunar Subterrane, and drops from Ahriman and Magic Dragon. It provides +10 Defense, +12 Evasion, +5 Magic Defense, and +10 Magic Evasion.

The Protect Ring provides 10 Defense, 12 Magic Defense, 5 Evasion, 10 Magic Evasion, and +15 Stamina, as well as resistance to Fire, Ice, and Lightning. It can be found in the Subterrane or dropped from Fiend Dragon.

Due to a glitch if one has a piece of equipment that absorbs an element, they will absorb the other elements.

Ring with same effect as Regen.

The Protect Ring is an accessory that grants the wearer Auto-Regen and provides +10 Defense, Magic Evasion, and Magic Defense as well as +1 Weight and +5 Stamina. It drops from Odin, is found at Istory Falls, Pyramid of Moore, and the Island Shrine, and is stolen from Soul Cannon at the Phoenix Tower.

The Protect Ring is an accessory that grants the wearer the constant Barrier and MBarrier statuses. It can be stolen from the right neck of Schizo, or morphed from Movers.

The Protect Ring grants Zack constant Barrier and MBarrier statuses. It can be bought from Mythril Mine Trading for 30,000 gil, and is a reward for completing mission 7-6-2, 9-3-2 or 9-5-3.

The Protect Ring is an add-on that halves damage from all elements, and provides +1 Spirit, +2 Defense, +4 Evasion, +3 Magic Defense, and +6 Magic Evasion. It teaches Half MP, Long Reach, and Mag Elm Null. It can be exchanged from Mene at the Chocobo Hot and Cold minigame for 8,500 points, or synthesized for 40,000 gil, Rebirth Ring, and Dark Matter at Hades's synthesis shop.

Others can be acquired by completing the Mognet sidequest by fixing Mognet Central, using a Dead Pepper at a mountain crack on the eastern part of the Lost Continent, completing the lost Nero family quest in Lindblum, and by answering all of the Ragtime Mouse's questions correctly.

Yuna's armor will take the name Protect Ring when its dominant abilities are Auto-Protect or SOS Protect.

Protect Ring only gives +1 to Agility, but can cast Protect II when used as an item.

In the original version, Ring of Renewal generates a constant Regen status and provides +6 Defense and +5 Magick Resist. It is found in Accessories 16 on the License Board and costs 70 LP to use. It can be bought for 18,000 gil at the Necrohol of Nabudis, and is received as a reward for completing the sidequest "Ann and her Sisters" on the skyferries.

Ring of Renewal has the same stats and effect in the Zodiac versions, but now requires the Accessories 22 license for 160 LP. It can be found as a treasure in Great Crystal (Uldobi Phullam Udiipraa), and Pharos - Subterra (Penumbra - South), poached from Deadly Nightshade (5% chance) and stolen from Shield Wyrm (rare) in Trial Mode Stage 67, or obtained from the "Ann and her Sisters" sidequest.

The Ring of Resistance protects party members from the effects of magical friendly fire. It is part of the Holiday Pack + downloadable content.

A ring forged from a metal imbued with magick.

The Protect Ring immunizes against Sleep and Doom. It can be equipped by any class. It costs 5,000 gil and is available in the Outfitters after story battle 15, and after viewing the cutscene at Lionel. It can also be found as a rare item within the Lionel Castle with Treasure Hunter.

Protector Ring is an accessory that provides Defense +30 and Ballistic -10%. It can be obtained by completing the Tasks "Monster Pursuit III" and "Secret Agent Agito V" and bought in Bazz for 7000 gil and 700 gil.

Protect Bangle grants Auto-Protect to the wearer. It is found in a cave in the Deist village, east of the armor/weapons shop. Fangs are scarce items that can be traded to the blonde gnome's friend for Fang Points (FP), which can in turn be traded for exclusive equipment. Protect Bangle can be bought for 50 FP.

A ring from the distant world of Gaia. Equipping it is said to bolster various elemental resistances. While useful as a piece of equipment, this finely decorated gold ring is also well known for its appearance, having been inlaid with a dazzling green gem.

Protect Ring (FFIX) is an accessory obtained during the Final Fantasy IX event, Silver Dragon. It provides 3 DEF, 3 SPR, and +10% all elemental resists. 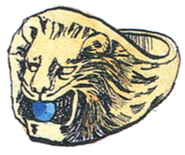 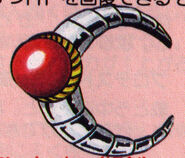