Protect (プロテス, Purotesu?, lit. Protes), also known as Barrier and Safe, is a recurring positive status effect in the series. It is often granted to a character through the use of the Protect spell, the auto-ability Auto-Protect, the item Light Curtain, or the Blue Magic spell Mighty Guard. It typically reduces damage inflicted by physical attacks for a set amount of time.

Protect is a positive status effect the player can use from their White Mage, White Wizard, Red Mage, Red Wizard, or Knight. It raises the target's defense slightly. It will not wear off after a set of time and can be stacked like the Temper spell. Protect will only wear off if the character either dies or has Dispel used on them. A Protected character will have a glowing orange outline around them.

Protect is a positive status that can be acquired using either the Protect spell or the Protect Tome. The spell raises Defense depending on the spell's level.

The Protect status can be provided using the Protect spell, the Defender as an item, or using the Minne song from the Madhura Harp with the Sing command. The status is somewhat random: it can nullify 25% or 50% or even more, while the song can be increased in effect by job-leveling.

In the GBA and PSP versions, Edward's Sing command changes to Chant while equipped with the Harmony Ring, granting Protect and Shell to the entire party.

Protect can be granted through the spell Protect, or through using the Murasame, Defender, or Protect Staff as items on party members. Edward's Guardian's Ballad song grants Protect and Shell to the whole party.

Protect may be gained by casting the Protect spell, the Blue Magic spell Mighty Guard, using the item Iron Draft via the Drink ability, and using the Mix command to combine a Dragon Fang with a Phoenix Down and create the item Dragon Defense.

Protect (originally called Safe) status can be granted using Protect spell, Mighty Guard, and many accessories and Gau's Rages. It reduces damage done from physical attacks to 170/256 (33% damage reduction) and is represented by a yellow aura around the protected character.

Barrier halves physical damage and is gained by using the Barrier spell from the Barrier Materia, or using the Wall spell or the Protect Ring accessory. The item Light Curtain can be used to grant protect to all allies. The Enemy Skill Big Guard casts Barrier along with MBarrier and Haste. The Barrier status appears as the draining red gauge in the battle menu. Haste makes it expire twice as fast, whereas Slow extends its duration and Stop locks it in place. Physical attacks received with the Barrier status active show a magical shield appear in front of the target when they are attacked, which becomes smaller and smaller the closer the status is to wearing out.

This section about a status effect in Before Crisis -Final Fantasy VII- is empty or needs to be expanded. You can help the Final Fantasy Wiki by expanding it.

Barrier cuts the physical damage by half and can be gained by using the Barrier Materia, Wall Materia, or some accessories. Cait Sith's Courage Boost! DMW grants the Barrier status along with many statuses, and the status can randomly be implemented via the DMW as well when not in modulating phase.

Protect is a positive status that reduces physical damage by half and lasts 32 seconds. It can be granted by casting the spell Protect that can be drawn from various enemies, using a Protect Stone item, using Selphie's Limit Break Wall, or casting Quistis's Limit Break Mighty Guard, which will grant Protect regardless of Crisis Level. Protect can also be provided using the Guardian Force ability Auto-Protect.

Protect halves received physical damage. It can be applied via the White Magic spell Protect and the Blue Magic spell Mighty Guard.

Carbuncle will also cast it it during its long summoning animation. When used, the character will glow yellow. How long the status lasts depends on the character's Spirit and the battle speed.

Protect halves received physical damage. This status effect can be gained from either casting the White Magic spell Protect, Kimahri's Ronso Rage Mighty Guard, wearing an armor that has Auto-Protect, using the item Light Curtain, or by Rikku mixing items to give the Protect status.

Protect reduces physical damage. It can be cast if one of the player characters is a White Mage who has already learned Shell or has the Helios Guard Garment Grid equipped.

Another form is SOS Protect used when a player's character gets low on HP. The Helios Guard Garment Grid comes with it along with the Warrior job class after learning Sentinel.

Protect is a status caused by the White Magic spell by the same name. It increases the target's defense by a flat amount.

The character is enveloped in a magick field, increasing defense and reducing physical damage taken. The effect is temporary.

Protect reduces physical damage by 25% and can be granted by using the Protect and Protectga spells, and by equipping the Shielded Armor. The player can also get it from picking up loot with the highest chain level. An enemy skill called Greater Barrier grants the status along with Shell. Guns and measures ignore the Protect status.

Basch can grant the Protect status to multiple allies by casting Protectga.

Protect is a status enhancement which reduces physical damage against the target by 33%. There is also an upgraded version of the status called Protectra which raises the physical resistance by 50%, but with shorter duration. Some accessories like the Guardian Amulet and the Shield Talisman grant Protect status either at the start or during a battle, although they only do this once. Aegisol casts Protect on the party on the field. Deprotect cancels out the Protect status, and Protect can also heal a target from Deprotect.

Protect reduces received physical damage by 25% and can be bestowed by Protect and Protectga. It can be removed with Dispel, Deprotect, and Deprotega.

Protect reduces physical damage received by 33% for a duration of 50 seconds. Protect can be bestowed by Protect Potion, Crusader's Potion, Holy Water, Phoenix Down, and Elixir.

With Protect Thief auto-ability Lightning can steal opponents' Protect status to herself. Tithed Protect triggers Protect if Lightning is ambushed in battle.

Angel of Valhalla can bestow Protect on Lightning with either the spell Protect or his Inspire ability. He can gains them at bond level 2.

Protect can be granted using Protect, Protectja, Wall, or weilding either Save the Queen or Durandal, or wearing the Onion armor, Lordly Robe or the Tynar Rouge. Protect does not directly reduce damage from attacks in this installment, but subtracts the attacker's physical AT by 1/3 in the damage formula. If the attack is done with a weapon that uses Magickal Attack or Speed, then Protect instead reduces that stat for the attack.

In addition, physical attacks that have stat-dependent success rates will face a penalty such that revised stat = [stat * 2/3] when targeting a Protected unit; consequently, Protect can lower either the success rate or the damage of physical attacks. The status lasts for 32 ticks.

Protect is granted by the abilities: Protect, Barrier, 100% Wool, and Yellow Spring. It reduces physical damage.

Protect can be achieved through the use of the Green Mage spell Protect, the Tinker ability Gold Moogletron, the Chocobo Knight ability Choco Barrier, and the enemy ability Light Curtain.

Protect halves physical damage and negates recoil from attacks. Stun value will not increase, and critical strikes will not be taken.

This section about a status effect in Final Fantasy Crystal Chronicles: Ring of Fates is empty or needs to be expanded. You can help the Final Fantasy Wiki by expanding it.

This section about a status effect in Final Fantasy Crystal Chronicles: Echoes of Time is empty or needs to be expanded. You can help the Final Fantasy Wiki by expanding it.

The Warrior of Light gains the Protect status while in EX Mode, boosting his Defense by 10 points.

An aura of light covers the body, raising defense.

The Warrior of Light again gains Protect status in his EX Mode, to the same effect as in the first game.

Protect is a status effect that halves damage until the end of the next round.

Cards that cause Protect

The Protect status increases the physical resistance. The status is shown with a yellow outline on the character, in the same manner of Final Fantasy V and Final Fantasy VI.

The Protect status is granted by the spell Protect in Bravely Default and Bravely Second. It raises target's Physical Defense by 25%. It is a White Magic ability that can be used by the White Mage. 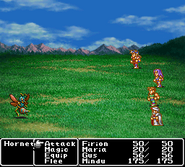 Protect in Final Fantasy IV: The After Years (PSP). 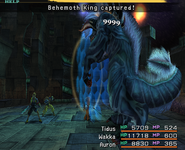 A Behemoth King under Protect in Final Fantasy X.

This gallery is incomplete and requires Bravely Default added. You can help the Final Fantasy Wiki by uploading images.
Statuses
Deutsch
Community content is available under CC-BY-SA unless otherwise noted.
Advertisement