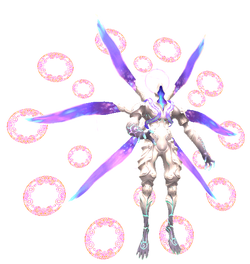 Promathia (プロマシア, Puromashia?), from Final Fantasy XI, is known as the Twilight God, and is Altana's evil counterpart: faceless, and bound in chains he reportedly bound himself in. His reasons are initially unknown, and are later revealed through the plot of the Chains of Promathia expansion.

Promathia was the god responsible for condemning the Zilart for attempting to open the Gates of Paradise, and called upon Bahamut to strike down their city made as a gate to the gods: Al'Taieu. Shortly after this, Altana wept the five divine tears that turned into the races of Vana'diel. However, Promathia made sure that this time the races would be preoccupied with something else to stop them from opening the Gates of Paradise. So, he created the beastmen to create eternal conflict between the great nations and people of Vana'diel. To complete his reign, Promathia seeks his own resurrection as the "Keeper of the Apocalypse," and his death, an event that would cause every soul in Vana'diel to return to him as he dies.

Though that is the story passed down through the cathedral teachings, this was not the whole story. The will of Promathia, the "Emptiness", is the manifestation of complete death. To ensure the Twilight God's continued existence, Altana stole the energy of the mothercrystal to create the races of people as vessels for it. As such, Promathia was in fact the father of the races of Vana'diel. The Dawnmaiden Yve'noile, while studying the Kuluu, isolated the Emptiness using the Chamber of Eventide, and accidentally created a supply of darkness that could lead to Promathia's resurrection.

Through the efforts (some conscious and purposeful, some not) of those in the present day (during the Chains of Promathia storyline), he is resurrected. The person most responsible for this is Nag'molada, who wished to know the truth of creation before being absorbed by the revived god. Through a series of missions, the Adventurer may find a way to the Empyreal Paradox, where one finds the evil god himself. In this location, the Adventurer will witness memories of the birth of Vana'diel, and along with Prishe and Selh'teus, the Adventurer must fight Promathia as the final boss of the expansion disc.

Near the end of the Abyssea add-on scenarios, an alternate world version of Promathia managed to slaughter all but Prishe when they came to fight him, having since evolved into the Wyrm God Shinryu.

Promathia is fought as the final boss of the Chains of Promathia mission campaign in the battlefield "Dawn".

"Promathia" is likely a bastardization of "Prometheus." [view · edit · purge]Prometheus was a Titan in Greek mythology best known for stealing the gift of fire from the gods and bestowing it upon humans. As punishment, Zeus had him chained to a boulder and had an eagle eat his liver every day, which would grow back the next day to be eaten again. To punish man, Zeus later sent Pandora to live among them, an event that ultimately unleashed the evils of Pandora's box on mankind. Eventually, Prometheus would be freed by Hercules. Similarly, Promathia is bound in chains. However, Promathia is much less benevolent. Ironically, he punishes the Zilart for a feat similar to what his namesake was punished for.